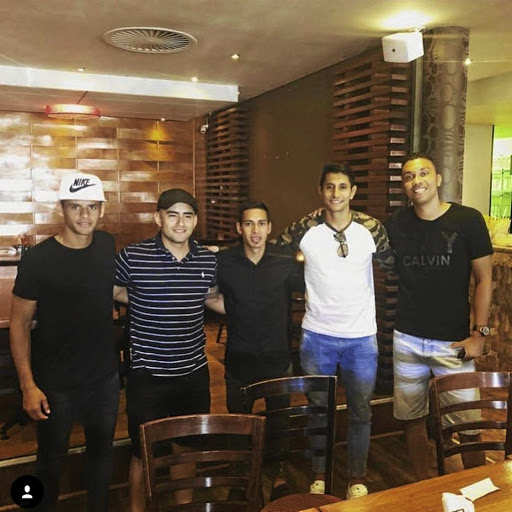 Gustavo Paez, an unnamed friend, and PSL colleagues Gaston Sirino, Leonardo Castro and Ricardo Nascimento out for dinner in Joburg.

It never crossed Ricardo Nascimento's mind that one day he would be living on a different continent - in Africa nonetheless - earning a living doing what he loves.

Nascimento is more than 7700km away from home in Ilheus, Brazil, but the Mamelodi Sundowns defender is having the time of his life.

"South Africa has been awesome since I arrived and in many ways it's similar to Brazil with the weather and the people.

"I have been here for more than two years now and it's great here, definitely my second home," Nascimento said.

Since joining Sundowns in 2016, the 31-year-old has won the CAF Champions League, CAF Super Cup and the Absa Premiership titles.

The Brazilian is not the only South American footballer to have made SA their home. Over recent years a new wave of players from the Americas has invaded the PSL including Gustavo Paez, Leonardo Castro (both at Kaizer Chiefs) and Gaston Sirino, also at Sundowns.

Yeye's skill stretches to the kitchen

Yeye knows how to cook up a storm.
Sport
3 years ago

Football and sport in general has a way of bringing people together who would otherwise have never known each other. Paez is from Venezuela while Castro is Colombian and Sirino is from Uruguay.

The four South American players have formed a friendship during their time in the country. Due to their inability to speak English, the foursome has stuck together to get by.

"It is thanks to football that we know each other and find ourselves in the PSL. In SA people speak English and where we come from the main languages are Portuguese and Spanish. Although they are different we can understand each other," Nascimento said.

Although Nascimento speaks Portuguese, he has no problem communicating with Spanish speakers Paez, Castro and Sirino due to the similarities in the languages. Learning English has been a bit of a challenge for him. "English is quite different from Portuguese. I find it a bit difficult but will continue to learn."

For leisure, they enjoy meeting for dinner and touring.

Homeboy Puleng Tlolane keeps it humble back in 'ZB'