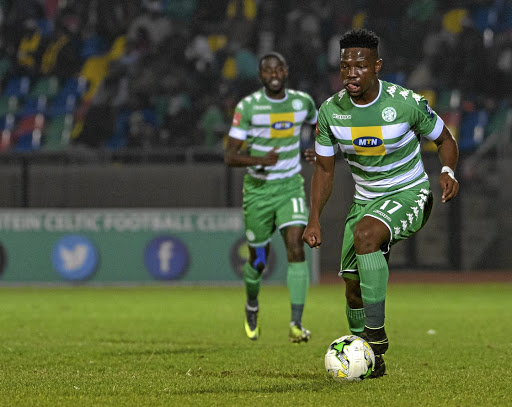 Bloemfontein Celtic striker Tshegofatso Mabasa refuses to view unsuccessful trials with Spanish giants Real Madrid as a failure, instead arguing that it helped him grow - as did a desire to emulate Bafana Bafana great, striker Benni McCarth y.

Mabasa has been one of the key members of a revamped Celtic side this season, scoring two goals in the Telkom Knockout en route to the final where Siwelele will face off against Bidvest Wits at Princess Magogo Stadium in Durban on Saturday.

"I have been overseas a few times on assessments, which I think have also made me grow. I was part of the Real Madrid academy for a couple of months in 2012. I played some friendlies [for Real academy] and I learnt a lot," he said.

The sharpshooter also had trials with English Championship side Bolton Wanderers in the same year.

"Wanderers wanted me to come back [after trials] and play for their academy but I had already signed a professional contract with Celtic. Through hard work I think I have an opportunity to seal a move to Europe at some stage in my career."

He has also found inspiration closer to home.

Midfield star Teko Modise has revealed that he didn't speak to Mamelodi Sundowns coach Pitso Mosimane for two years prior to his departure this year.
Sport
3 years ago

"I grew up looking up to McCarthy. He was my role model when he was playing for FC Porto in Portugal," Mabasa told Sunday World. "I am the kind of player I am today because I have always wanted to emulate Benni."

After representing SA in the African Nations Championship qualifiers in August, the bulky Phunya Sele Sele centre forward wants to return to the Bafana Bafana set-up.

"I know I have to work even harder but I would like to play for Bafana again. If I can keep on scoring, it's possible."

The 21-year-old front man is likely to spearhead Celtic's attack against Orlando Pirates at Dr Petrus Molemela Stadium this afternoon.