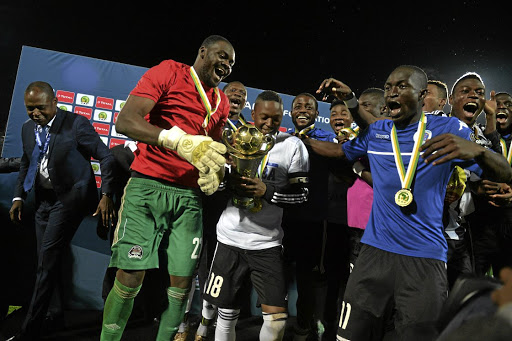 What was meant to be a historic night of celebration for South Africa turned into anguish as TP Mazembe defended their CAF Confederation Cup title with a 2-1 aggregate win over SuperSport United at the Lucas Moripe Stadium last night.

The goalless draw on the night meant the DR Congo giant would retain the title they won last year. SuperSport fell short after having qualified for the final for the first time.

Having encountered different kinds of elements on the continent during their campaign, SuperSport were to be again tested one last time by a rain-soaked and chilly night in Atteridgeville.

Temperatures dipped to 13ºC as the unrelenting rain poured down. While it was hoped that it would rain goals during the encounter, the conditions added a spanner in the works for the clash.

TP Mazembe coach Pamphile Mihayo credited their defence of the CAF Confederation Cup against SuperSport to a combination of experience and a good ...
Sport
4 years ago

Both teams ended the game with 10 men after Mazembe defender Chongo Kabaso and Thuso Phala received red cards. After travelling eight countries and all SuperSport had to do was win their 18th match in the competition to walk away with the R18million prize money.

Since their first trip to Madagascar to face Elgeco Plus in February, it all boiled down to one game for Matsatsantsa a Pitori. Mazembe came out guns blazing with the aim of taking full control of the tie. The away goal SuperSport bagged in the first-leg made the visitors even more determined to get their own in the return leg.

The South Africans were on the ropes in the early stages and Mazembe could have gone ahead by two goals. SuperSport appeared rattled as the opposition penetrated their midfield with ease. Reneilwe Letsholonyane returned to the starting line-up, in the place of Dove Wome, after missing the first leg due to suspension.

The first scoring opportunity fell to Zambian midfielder Rainford Kalaba who beat the offside trap but fired wide with goalkeeper Ronwen Williams at his mercy in the 10th minute. Four minutes later, Mazembe had yet another chance after the ball fell kindly into the path of Daniel Adjei but the midfielder hit the ball wide of the target.

Matsatsantsa fought back with a handful of chances going their way. On the night though their attack was not sharp enough with Jeremy Brockie and Bradley Grobler rarely getting a sight on goal.

Winger Phala was also not his talismanic self during the match with the team hardly getting crosses into the box. Phala would eventually get a red card for a dangerous tackle on Nathan Sinkala in the 89th minute. They seemed to have not recovered from the signs of tired legs from the first leg.