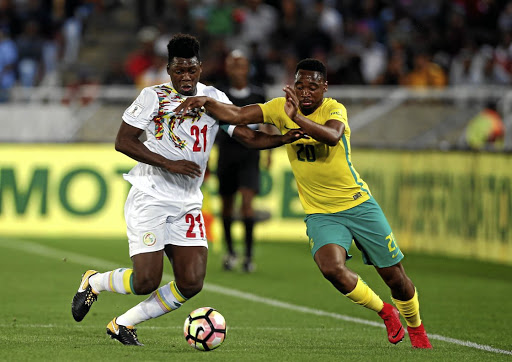 Senegal's Lamine Gassama, left, fights for the ball with Bafana Bafana's Sibusiso Vilakazi during their Word Cup qualifier match at Peter Mokaba Stadium in Polokwane on Friday. Bafana lost 2-0 and crashed out of the 2018 football extravaganza. / Siphiwe Sibeko / Reuters

Bafana Bafana's 2-0 defeat to Senegal means they are missing out on the World Cup next year, but did the boys do enough to win the match at home? Sunday World rates them.

He wasn't at fault for the two goals with the Senegalese strikers opening up the Bafana defence with ease on each occasion.

Some will remember the own goal he scored and that Senegal striker Mbaye Niang was easily finding space on Mkhize's side especially in the first half, but Mkhize, making just his second appearance, also showed a willingness to fight for the jersey.

He was nowhere to be found for both Senegal's goals. Hlanti appeared to struggle with the pace of the game and only had a couple of decent crosses, so wasn't able to use one of his strengths which is going up field and delivering those dangerous crosses.

This was certainly not one of his best games. Firstly, he was caught out by Diafro Sakho's run that led to the latter scoring the first for Senegal and could have done better defensively to help prevent the second.

Like Gould, he struggled with Senegal's front men and couldn't close down players quickly especially for the first goal. So Daniels didn't partner Gould well this time.

Probably Bafana's best player on the night. Showed a lot of energy in fighting for the ball and he was aggressive against some tough opponents. Furman even came close to scoring with a long range strike.

"Mshishi" had his moments in the first half and came close to scoring, but wasn't as influential in the second half and was taken off with about 20 minutes remaining.

Mokotjo always made himself available to his teammates and when he made a pass, he would move into space to create an option for the one in possession, but could have used his passing skills to send in the through balls.

'Vila' never stopped running and trying. He tried his best to link up with his fellow strikers, but not much worked out.

He could have pulled Bafana back into the match, but hit the crossbar when Senegal were leading 1-0. He faded in the second half.

Julius Malema has taken his support for Bafana Bafana to another level.
Sport
4 years ago

He struggled to get past the big Senegal defenders and always seemed to be pushed easily off the ball. With the benefit of hindsight, perhaps he could have done better if he was feeding off a bigger striker like Dino Ndlovu or Bradley Grobler.

Had about half an hour on the park after coming on for Manyama, but was playing too deep as he looked to get the ball and get the team moving forward.

Didn't see much of the ball in the 20 minutes that he played after taking over from Zwane.