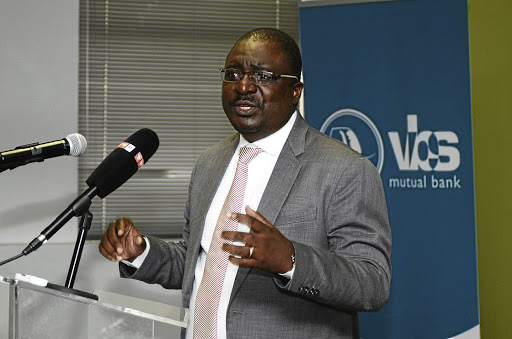 Former chairman of VBS Mutual Bank Tshifhiwa Matodzi is adamant he did nothing wrong in the collapse of the bank.
Image: Mduduzi Ndzingi

The bank's liquidator, Anush Rooplal, is also gunning for a R50m overdraft facility that was allegedly created fraudulently by VBS for the benefit of Mmbi's company.

Rooplal filed court papers at the Joburg high court this week arguing that the millions owed to the bank be paid back.

"The respondent is indebted to the applicant as stated in the restated statement of the respondent's VBS classic business account... in the amount of R37,788,788.61, as at 30 April 2019. Despite demand, the respondent has failed to pay the indebtedness due and owing to VBS," the papers read.

According to court papers seen by Sunday World, Mmbi's company benefited from two fictitious credits of R300,000 and R15.7m which were made into its VBS account on March 30, 2017.

"These fictitious credits are reflected in the respondent's VBS accounts statement as 'Absa deposits TR6 and Absa deposits TR7' respectively," the papers indicate.

The papers further show that Venmont also benefited from another fictitious credit of R50m which was also made into its bank account, and was reflected as an Absa deposit.

"The fictitious credits were not real payments or deposits... they were nothing other than false entries," said Rooplal in his affidavit.

A forensic report into one of the municipalities that invested millions of rand of public money into the collapsed VBS Mutual Bank has recommended ...
News
2 years ago

Mmbi said she was not aware of the application or the debt but would consult with her lawyers for advice on how to deal with the matter.

"We can't comment on the matter because we have not seen the papers. I have never spoken to the liquidators. I will talk to my lawyers for advice on how to deal with it," she said.

Rooplal said they were taking legal action against Venmont and Mmbi as they had benefited from a fraudulent scheme that had led to the loss of at least R1.5bn by VBS.

He said the legal proceedings were about recovering the money owed to the bank.

"The fraudulent scheme led to VBS's severe liquidity crisis and it being placed under curatorship by the prudential authority of the SA Reserve Bank and subsequently to it being liquidated on November 13, 2018," argued Rooplal.

The VBS liquidator further stated that Venmont benefited from the bank through the insistence of Matodzi, who was an integral part of the fraudulent scheme.

Rooplal said Venmont was in the list that Matodzi gave to VBS's former head of treasury Phophi Mukhobodwane with the instruction that the company's overdrawn account be cleared.

In his legal papers, Rooplal was asking the court for an order to liquidate the company and its director, stating that they have ignored letters of demand hand-delivered to them at their place of business.

Rooplal further confirmed to Sunday World that he had filed papers.

More than R1.6bn of the R2bn invested by municipalities into VBS Mutual Bank cannot be recovered.
News
2 years ago

"They owe the bank money. We sent them a letter of demand which they did not respond to. That's why we are taking legal action against them," he said.

The court papers show that the history of Venmont's banking relationship with VBS started in March 2016 when it was granted a R4m overdraft by the bank on a 12-month agreement.

According to the agreement, the company was entitled to raise the limit of the overdraft either by writing or e-mailing the bank.

But Rooplal said the limit mysteriously mushroomed to R50m without due process being followed amid the creation of fictitious deposits into the company's bank accounts.

The company's bank statements show that it was merely used as a cash withdrawal platform with almost R20m withdrawn from the account in cash.

The cash withdrawals, according to the bank statement attached to the application, ranged from R200,000 to R6.5m and were made between January 2016 and November 2017.