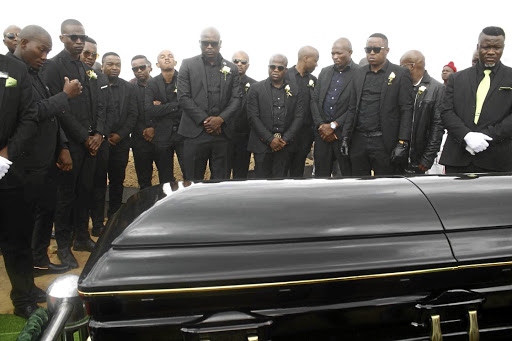 Friends and family of Caswell Maseko paid tribute to the slain businessman who was laid to rest yesterday.
Image: Kabelo Mokoena

The ex-wife of slain businessman Caswell Maseko has told of the double pain she suffered after her high school sweetheart was taken away from her.

Thembisile Masanabo dropped a bombshell when she told Sunday World yesterday that the woman who stands accused of killing the father of her five-year-old son snatched him from her back in 2013 following an adulterous relationship.

Masanabo, 29, said as if that was not enough, Itumeleng Makhalemele-Maseko had now taken Maseko permanently away from her and her son by allegedly stabbing him to death last Saturday.

She said even though Maseko had divorced her to move on with Makhalemele-Maseko, she never stopped loving him and remained a part of his family.

"My son has been asking questions I can't even answer and I hope we find strength to move on," she said.

"Caswell knew how much I loved him even after he divorced me. That is why I remained close to his family," she said.

The grieving Masanabo wore black and was seated in the front row with her son and Maseko's family at GNF Church in Emalahleni, Mpumalanga, where his funeral service was held yesterday.

A few paces away from them, sat Makhalemele-Maseko's family members who were holding the couple's two children, aged four years and four months.

Makhalemele-Maseko, who is in custody for her husband's death, was not recognised on the programme and on the memory pictures which were displayed on a big screen TV during the service.

The pictures reflected Maseko's moments with his ex-wife when they got married, him as a young boy and with his sons and friends.

Maseko's friends, fellow businessmen and members of the Mesh-Kings club which he founded in July this year, were out in full force to pay their last respects.

He had formed the club to bring together young entrepreneurs from Emalahleni to motivate each other and celebrate their life and business achievements.

Chairman of the club Themba Mabena said they don't only meet and drink expensive booze but they also do charity work and youth development while they have fun.

"The Mesh-Kings club is just to show young people that you can work hard and still play hard," said Mabena.

The Mpumalanga lawyer who allegedly stabbed her husband to death at the weekend was apparently assaulted by the man before the incident.
News
3 years ago

One of Maseko's friends and Mesh-Kings member Siyabulelwa Nyati said he will always remember the call he received from Maseko a night before he died, asking when they would meet again.

Nyati said he was shocked to receive a call the next day to inform him that Maseko had been killed.

"From what we saw from the outside, they seemed happy in the marriage.

"At some point they even went on a baecation to Paris for two weeks," he said.

Some mourners were overheard saying if there were awards for funerals, Maseko's would rank as a funeral of the year.

At least 300 luxury cars formed part of a convoy to the Kroomdraai Cemetery where Maseko was laid to rest.

Among the cars that ferried the family from the church to the gravesite were black Mercedes-Benz G-Wagons and Mercedes-Benz Vianos.

At the gravesite, numerous gunshots were fired when Maseko's casket was lowered into the ground.