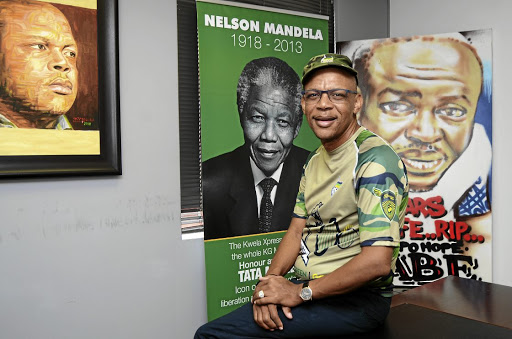 Wearing his aunt's old police training uniform and his mother's beret, Pule Mabe knew from the tender age of 10 that he would venture into the political world.

The newly appointed ANC national spokesman speaks fondly of his youth days and how it shaped him into the man he is today.

"I wore that uniform proudly (at an event he recalls from his youth), with my mom's beret carrying a badge of Nelson Mandela as a young ANC pioneer officer. I welcomed Cyril Ramaphosa at the local stadium using only my voice and a loud hailer. I had slept at the stadium the night before, excited to stand guard. That beret is very significant in my life and I still carry it today," Mabe says proudly.

Raised in the Namakgale township of Phalaborwa, Limpopo, the 37-year-old says his grandmother gave him a beating when he questioned why she was upset over a wrist watch she received from a mining company after 25 years of service. She was the first African woman to work at the Palabora Mining Company in the mid-1960s.

"She was looking for the misplaced watch. It carried great sentimental value to her. She didn't find it amusing that I questioned why they only gave her a wrist watch," he says.

The politician-cum-businessman also speaks of how he was raised by a single mother whom he credits for his entrepreneurial skills.

"She sold Tupperware, amongst other things, was active in youth activities at church and sold food parcels. She made sure we never went to bed hungry," says Mabe. He reveals his funnier side as he relates how his antics as an idealistic young man got him into trouble.

"I remember in Standard 3 [Grade 5], my English teacher went to London, where they were going to teach her to become a librarian. When she came back, we had to sing this funny Sepedi song praising the Brits.

"It was hilarious and I questioned why they are so great. Bantu education was cruel to us. I was supposed to attend a school in town, but they wanted me to go back to Standard 5," Mabe says.

"Instead of going to school, I hung out with older comrades around the taxi rank. But I'm proud to say that I could already read the Freedom Charter off by heart by then.

"A neighbour who went on to become a famous Muvhango actress told my aunt where I was hanging out. I went back to the village school to do Standard 8. The maths teacher beat me, I took the stick and beat him back. I was the hero on the bus back home that day, with fellow pupils calling me 'the fearless one'," he laughs.

No turning back, ANCYL's presidency hopeful says
News
3 years ago

Although he lived and breathed politics, he went on to study journalism at Tshwane University of Technology.

"Media was always close to my heart. But I must admit that I took advantage as a rookie at the Mail and Guardian. I would lie and say there was something happening in Pretoria, take a car there and spend time with my girlfriend - who is now my wife," he says, giggling.

Mabe says he and Hleki, whom he fondly refers to as his "pillar of strength", met during their tertiary studies and now have two beautiful kids.

"The birth of my children also came at rather significant times. I lost my dad when I was 18. More importantly, I lost my mom when I was 22. She never got to see my first-born son, who came a year after her death. Aptly named Kgothatso, he was and is still my comfort. He was also born in 2003, on the anniversary of Solomon Mahlangu's death. He was hanged on April 6," Mabe relates.

"My daughter, Naledi, turns nine in a few days, and is an ardent reader, like her dad. Her name means 'the star has arrived'. She came shortly after my appointment as treasurer- general of the ANCYL [ANC Youth League]."

He promised himself as a 20-something-year-old that he would look better and be fitter at the age of 40. Three years shy, he has already achieved his goal with significant weight loss and by giving up smoking and drinking.

"I must say I don't miss it. I told my wife back then that I will live my best life at 40 - slim and healthy. I now eat healthy, at the proper times and I take long walks. I've also been playing golf for the last three years," he says.

He says although his new role is a daunting task, he is honoured and hopes to fulfil it to the best of his ability.

Contender expected to canter to top spot, as Sabelo loses hope
News
3 years ago
Next Article