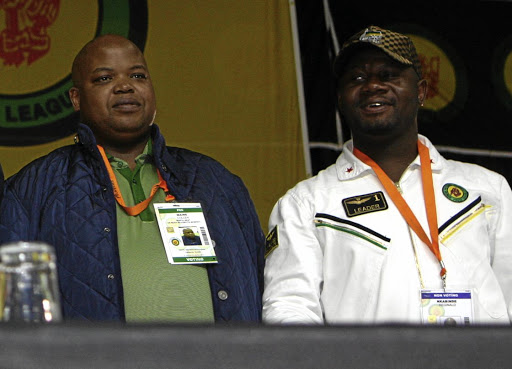 ANC Youth League president Collen Maine and treasurer-general Reggie Nkabinde, who is expected to take over from him. / Simon Mathebula

Mabala Noise boss and ANC Youth League treasurer-general Reggie Nkabinde looks set to replace Collen Maine as president without raising a sweat when the congress is held later this year.

This emerged this week as party insiders told of how there are moves to bring the congress forward from September to May, before the current leadership's term ends in August.

One of the provincial leaders who was a contender for the youth league's top spot, KwaZulu-Natal secretary Thanduxolo Sabelo, has surrendered the fight.

"I don't think I am ready for the position," he said.

"My view is that there are leaders who are better positioned for the job and they include comrade Reggie Nkabinde, Ndumiso Mokako, Mlondolozi Mkhize, Muhammad Khalid Sayed and Vincent Shoba," said Sabelo.

Zandi Khumalo is happy to have found a new home for her music after being released by Mabala Noise earlier this year‚ signing a global record deal ...
Lifestyle
4 years ago

Nkabinde said he was ready to be deployed to any position by the party.

"If the branches say I must serve as president, I can never say no," he said. "Wherever the ANC send me, I will go."

Incumbent president Maine is not eligible to contest for a second term due to his age and his direct election into the ANC national executive committee (NEC).

"Reggie Nkabinde is the popular name in Gauteng," said Chiloane.

"He appears to be the only candidate to be endorsed by the provincial structures of the league."

Other youth leaders who might emerge as dark horses for the position of league president are said to include Tshwane regional chair Lesego Makhubela and Ekurhuleni chairman and MMC for housing in the Ekurhuleni municipality, Lesiba Mpya.

The two Gauteng youth leaders are believed to have strong support in their regions and cannot be discounted in the race for the position.

Chiloane said he was no longer eligible to participate in youth league politics because he would be turning 36 in March.

ANCYL secretary-general Njabulo Nzuza is likely not to make a comeback into the top six of the league as there has not been a single mention of his name for any position.

Spokesman Mlondolozi Mkhize described information that the youth league conference is likely to be brought forward as speculation.

"There are two ways in which a decision can be taken to bring forward a scheduled conference of the league and that is if two-thirds of provincial structures of the league request such a move, and second, through an NEC decision, and neither of the two have happened at the moment.

"The ANCYL is yet to have it's first NEC meeting of the year in mid-February, and still there's no guarantee that a discussion about the conference would be on the agenda of that meeting," Mkhize said.

The youth league spokesman has confirmed that the ANCYL was aware that members were already raising their hands to contest for the presidency of the organisation but he refused to reveal their names.

ANCYL treasurer-general and Mabala Noise boss Reggie Nkabinde sure knows how to spoil his lady. A week after their extravagant wedding celebrations ...
Shwashwi
4 years ago
Next Article