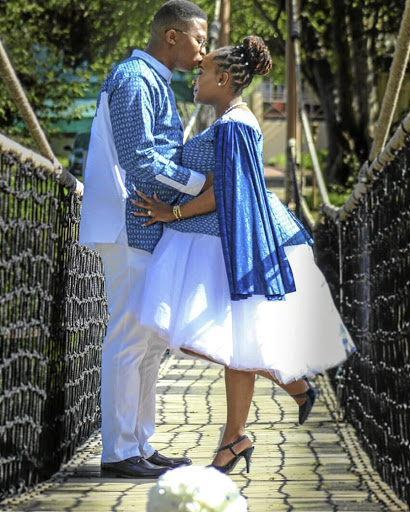 Mmapaseka Moiloanyane was so certain her crush would contact her that she immediately left her man after she met him.

She had accompanied a mutual friend to the event and when she saw Kabelo, she was bowled over.

"The first time I laid my eyes on him, I knew he was the one. He had an Afro. I was also seeing someone at the time. The next day I broke up with my then boyfriend. I told him I had met my dream guy the previous day," she says.

Mmapaseka hadn't been approached by Kabelo yet, but her instincts told her he would.

"My gut feeling told me he would be mine."

"He proposed just a few days before my birthday. He took me in store and asked me to pick a ring. It was very random, he's not much of a romantic," she laughs.

They combined their lobola and official wedding into one event.

Their two-day ceremony was held in Tarlton and Krugersdorp respectively.

"We decided to combine the lobola day and wedding day together in order to save costs.

"His family approached my family five months before the wedding date to ask for my hand in marriage. My parents gave them permission as they agreed on a price for lobola. My partner and I had already decided that we would get married close to my birthday. Plans were immediately set in place," she says.

She played around with the white wedding gown and traditional attire for her two gowns, combining a traditional bodice and tulle-inspired bottom .

"We wanted to celebrate our cultural beauty. We kept things simple to avoid unnecessary costs."

She says that she would like a bigger and better celebration for their 10th anniversary.

"We were stressed out on the day, we were running late due to lobola negotiations and missed out on seeing the beauty of it. Next time around things will be better," say the couple, who were blessed with a baby boy in April.