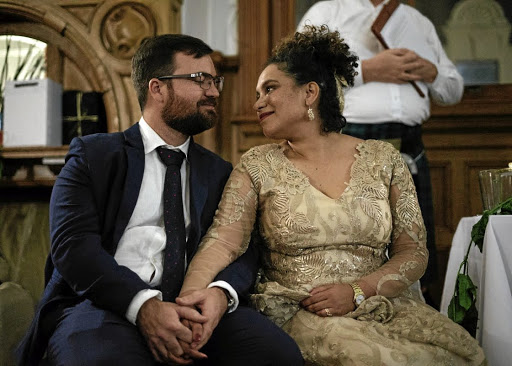 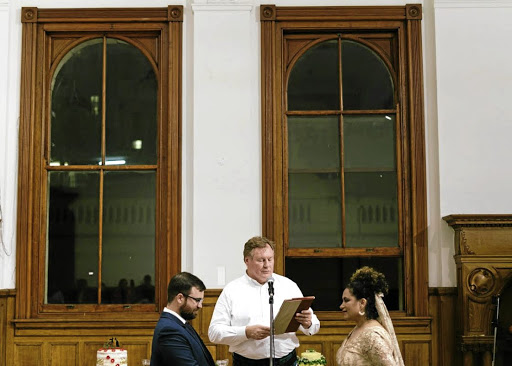 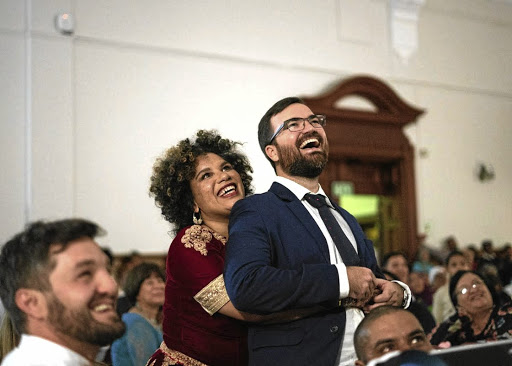 Adams, popularised by her role as Zadie September on M-Net soapie Binnelanders among others, gushed that "he's a doctor who holds a PhD in Economics", as she spoke of her American bae.

Their first official ceremony was held in January with the colourful reception held at The City Hall in Cape Town this week. She looked like a queen, bedazzled in Indian attire.

Coming from a Muslim background, the freckle-faced Adams said the reception combined elements from both their cultures.

"I come from a Muslim family and so I am all about three dresses, multiple events, huge numbers and biryani," she said.

The couple met almost six years ago at a cricket game at Newlands Stadium in Cape Town a day after New Year's Day. "We have mutual friends. Exactly five years later to the day, we got married in a very small but very formal and official way at Home Affairs in January this year. Then on July 28, Brian and I had our official wedding reception.

She attends the same church, the St John's Apostolic Church of Prophecy, with her husband, who is also a pastor.
Lifestyle
3 years ago

"We got 300 people to celebrate and witness our marriage at the City Hall. I have always loved this venue, not only for the majesty of the old building, but for the historical significance too. It's such an important landmark. It was perfect."

City Hall was where Nelson Mandela gave his first address after his release from prison in 1990. Adams, who also played Lizzie on the kykNet drama Sara Se Geheim, said her real-life weddings were even more magical than her on-screen one to Father, played by Keeno-Lee Hector.

She said Brian proposed on a Monday in their home while bringing her coffee in bed.

"That's a luxury I have enjoyed every day in the years that we have been together. It wasn't a cheesy Instagram photo shoot, but it was perfect.

"On our wedding day, his parents were here from America and also my brother and his family from Norway."

For her January ceremony, she wore a green and gold sari-inspired dress by Tasleem Bulbulia. On Tuesday, she wore two dresses, both made by designer Ronel Wagener.

"Again, the dresses were made from fabric I had bought in India. I love the style, the aesthetic, the numerous costume changes that go with that kind of wedding."

She had 25 bridesmaids, including actresses Kim Engelbrecht from The Flash, and former 7de Laan star Diaan Lawrenson.

Their marriage officer was kitted out in a Scottish kilt while Adams, who is Cape Malay, bedazzled in a red Indian sari.

They exchanged vows with readings as diverse as the Quran and Bob Marley.

Adams said their honeymoon happened in the middle of it all. "After the January wedding and before the July reception, we spent two weeks in Portugal. It was incredible and I fell in love with the place."

Sophie Ndaba and Max Lichaba are in search o a wedding venue.
Shwashwi
3 years ago
Next Article