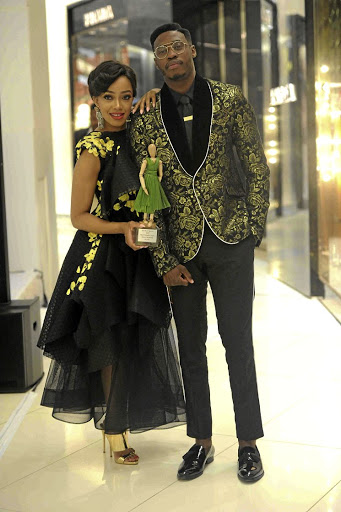 While Pearl Modiadie put her nuptials on ice, it is only a matter of weeks before sultry actress Dineo Moeketsi walks down the aisle with her long-time rapper beau Zothile Langa, 29, better known as Solo.

According to the couple's close friends, preparations were in full swing for what will be Moeketsi's fairy-tale wedding.

The couple, who have been together for six years, will start with a traditional wedding ceremony at a date still to be announced.

"She's currently weighing her options in terms of outfits, so she's meeting up with different designers to get an idea of what her and soon-to-be hubby's traditional outfits should look like and she' s very excited," one friend said.

The friend, who spoke on condition of anonymity, added that the star wants to be involved in every aspect of the planning process so she could make sure that her big day happens just the way she envisioned it.

TV star mulls saying 'I do' as she and Buthelezi have 'different priorities'.
News
4 years ago

"She wants nothing but perfection for her big day, which is why everything will be done her way," said the pal.

Another friend said the 29-year-old actress' wedding will take place in a few weeks at an undisclosed venue in Joburg.

"Being the very private person that Dineo is, she's keeping things as quiet as possible because she wants to surprise everyone and doesn't want to be predictable."

The couple will also have a white wedding ceremony later in the year, the friend said.

"She's pulling out all the stops for her white wedding as well. We all know she loves fashion, so she's making sure that she is the talk of the town. She is making sure to give very specific instructions to the designer as to how her dress should look like."

A third friend said both the couple's families are over the moon about the pair's upcoming nuptials because the couple has been through a lot together.

"It's very rare to find relationships that last this long in the entertainment industry because there's so much going on and people's egos sometimes get in the way of their relationships.

"But Dineo and Solo proved that a relationship can work despite the fact that they are both in show business. Their love for each other is unwavering, which is why they both have the support of their families," said the bud.

Her man also gave us the run around.

"My man, you are going to have to call me much later, because I'm shooting at the moment."

From now on you can call popular Ukhozi FM DJ Thembeka Zondo‚ Mrs Cele!
Pic of The Day
4 years ago
Next Article