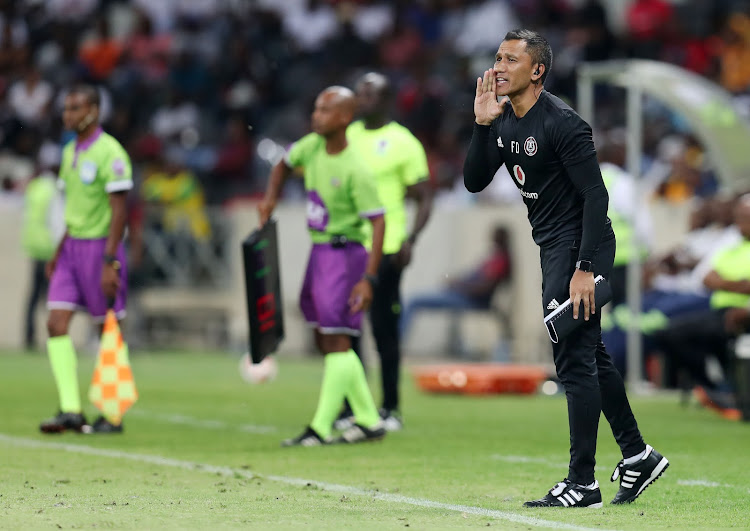 Fadlu Davids, assistant coach of orlando Pirates during the Absa Premiership 2018/19 match between Supersport United and Orlando Pirates at the Mbombela Stadium, Nelspruit on the 20 February 2019.
Image: ©Muzi Ntombela/BackpagePix

Orlando Pirates may have several personalities barking instructions from the bench during their games but assistant coach Fadlu Davids insists that there's no risk of the players receiving mixed messages.

Colourful and outspoken assistant Rhulani Mokwena is often the most animated on the bench but Davids said they speak with one voice under the leadership of head coach Milutin Sredojević.

“It is very important that we have one voice.

"Whatever we agree upon in terms of the game plan and tactics at training is what we shout (from the bench) during the game and the players understand‚” he said at Orlando Stadium in Soweto on Wednesday as Pirates prepared for the crunch Absa Premiership visit of bitter rivals Mamelodi Sundowns on Monday.

“Although there are three guys shouting from the top of their voices on the touchline‚ they are shouting the same thing.

"It is very important to be united as a technical team and that’s what we are.”

Sredojević often cuts a calm and calculated figure on the bench and rarely shows emotions but Davids said he always has the final say on whatever they do.

“The final decision lies with the head coach but he has full confidence and trust in the abilities of Rhulani and myself to relay his messages across to the players‚" he said.

"We always have a clear message and it doesn’t matter the source of where the message comes from.

"The most important thing is that it is a message that we have agreed upon.”

Davids‚ who was a surprise addition to the Pirates technical team in January after his long relationship with Maritzburg United came to an end‚ said he is learning a lot from working with Sredojević and Mokwena.

“It has been a good experience for me to come to this environment where other coaches are not threatened and always looking over their shoulders‚" he said.

"I am always looking and open to learning new things and to gain and give knowledge because we are all students of the game.

"I truly believe that you never stop learning in life and this has been a good experience for me.”