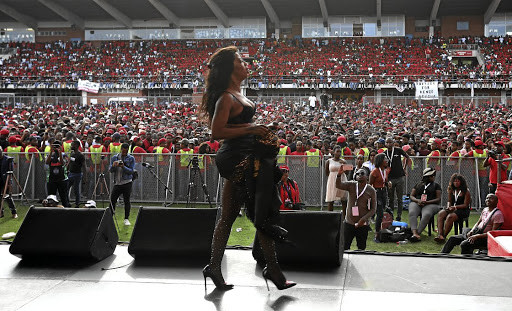 Kelly Khumalo leaves the stage after her performance was disrupted by EFF supporters at a rally held at the Chatsworth Stadium in Durban yesterday.
Image: JACKIE Clausen

This was at the Chatsworth Sports Stadium, south of Durban, where the supporters gathered for the party's provincial manifesto launch.

Khumalo had been dating Meyiwa when he was fatally shot allegedly by intruders at her home in Vosloorus, Ekurhuleni, five years ago.

After performing one song and getting ready to perform another, members of the crowd towards the back of the stadium grew louder with chants of Meyiwa's name, to which Khumalo signalled the DJ and said "one more and then I'm out of here".

She left the stage after the second song. Khumalo's manager, Gavin Gutu of Universal Music, later told Sowetan: "I'm not aware of the incident and I don't have a comment about it."

Beyond this incident, other performers, including Kelly's sister Zandie Khumalo, L'Vovo and Danger of Big Nuz fame, kept party supporters in good spirits.

The clock is ticking for police minister Bheki Cele to deliver on his promise to catch Senzo Meyiwa's killers.
News
2 years ago

Over a week ago, Khumalo criticised the police for their lack of accountability and action in the Meyiwa's murder case.

She insisted on eNCA that officials had everything they needed to make arrests.

"I don't know why police have not found the perpetrators. There were fingerprints. A hat (belonging to one of the armed men) was found. There were witnesses," she said at the time.

A frustrated Khumalo added that she didn't know "what the public wants from me".

The Orlando Pirates goalie and Bafana Bafana captain was shot and killed in 2014 in what was believed to be a botched robbery. 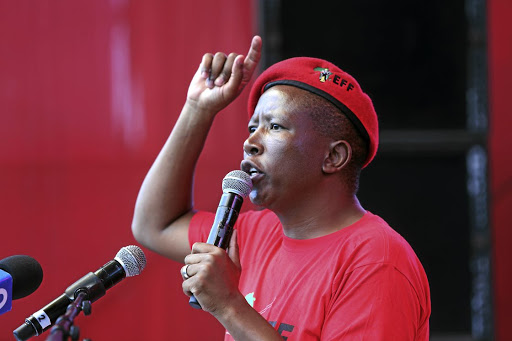 Police minister Bheki Cele had promised that there would be arrests in the case by December, then "maybe even by Easter".

Meanwhile, EFF's commander-in-chief Julius Malema was expected to address supporters at 1pm but by then he had yet to deliver his keynote address at the Maphiniki Sports Complex in Kuruman, Northern Cape.

According to the EFF's official Twitter account, Malema was meant to address supporters in the Northern Cape at 10am and then travel to KwaZulu-Natal.

Just after 2pm, the EFF tweeted that Malema had arrived in the Northern Cape.

There was a strong police presence in Chatsworth. Despite the long wait in the heat for Malema, the spirits by his followers remained high despite the delay.

In the wake of major unrest in the province, pertaining to a high-profile political murder case, ongoing issues of a lack of basic services and high levels of corruption and crime, Malema's KZN keynote address was expected to be a major talking point and subjected to scrutiny by opposition parties, vying to gain a foothold in the country's third poorest province.