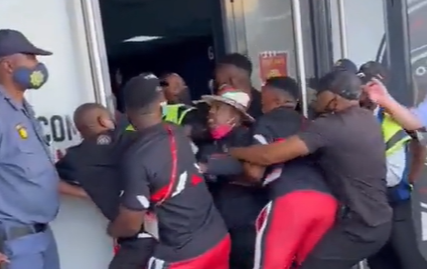 A screenshot of the video posted by TS Galaxy on their official Twitter account showing TS Galaxy chair Tim Sukazi being manhandled by security officials at Orlando Stadium at the DStv Premiership game against Orlando Pirates on December 11 2021.
Image: Screenshot

Orlando Pirates have been found guilty of denying TS Galaxy president Tim Sukazi access to the Orlando Stadium field and changerooms during their DStv Premiership match in December.

Sukazi was manhandled by security officials and not allowed on to the playing field. Pirates won the match 2-0.

“The PSL disciplinary committee has just returned a guilty verdict against Orlando Pirates. This is a result of Pirates being found to have unreasonably denied Mr Tim Sukazi access to Orlando Stadium when he was entitled to do so,” Majavu said on Tuesday.

“In the result, Orlando Pirates was found to have brought the league, the game, Safa [the SA Football Association], Caf [the Confederation of African Football], Fifa and the sponsors into disrepute.

This is the kind of treatment we are subjected to at Orlando Stadium. They don't want to allow our President to access the field but he has an accreditation that allows him to be in the field.#Siyadumuza#TheRockets#TSG pic.twitter.com/W4U8eWaTRQ

“Having been so convicted, the next stage is for both parties to address the committee with regards to appropriate sanctions.”

Majavu said the sanction will be announced at the beginning of May after the two teams have submitted their arguments on an appropriate sentence.

“The matter will be argued on May 3 at 3pm with regards to what each party contends should be the appropriate sanction, whereafter the DC will make its final decision on sanction,” Majavu said.