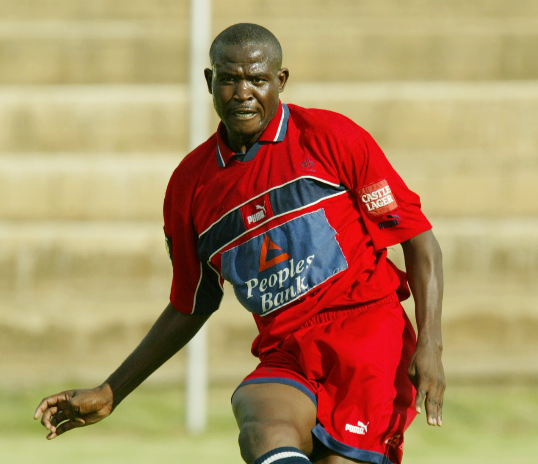 Former Jomo Cosmos captain Andrew Rabutla feels the pain of the club on the verge of relegation to the amateur ranks.
Image: Gavin Barker/BackpagePix

As Jomo Cosmos teeter on the brink of relegation from the GladAfrica Championship to the ABC Motsepe League, former captain Andrew “Jaws of Life” Rabutla says it is sad to see the club in this situation.

Ezenkosi, who last played in the Premiership in the 2015-2016 season, will be relegated to the third tier of SA football if they draw or lose against TS Sporting in their GladAfrica (also known as the National First Division, NFD) fixture in Brakpan on Saturday.

Cosmos, who are coached by legendary owner Jomo Sono, hold an important place in SA’s history for producing players who went on to become household names and won trophies.

Unfortunately, the club has suffered a long and steady decline and Rabutla said it will be sad to see a club with such a rich history go down to the amateur leagues.

“I don’t want to lie to you, it is very sad what is happening to Jomo Cosmos,” said Rabutla, who at one stage worked as team manager at the club for about a decade.

“I started and built my career at Cosmos and the club helped to change my life for the better and realise my dream of playing for my country. They have not been officially relegated as things stand now, but the odds are stacked against them to survive.

“'Bra J' [Sono] has a policy and system of running the club but if your policies and systems are not working you must change them. People were asking why he doesn’t get a coach, but he stuck to his guns of coaching the team.

“Over the past decade or so there have been many developments when it comes to football coaching and also the introduction of professionalism in management and running of a football team.

“I am not saying that Bra J was not professional but the reality is that the team struggled for a long time and he didn’t want to change the policies and systems that were not working for him.”

Rabutla said when a team gets relegated to the amateur leagues it is difficult to bounce back, and that is the challenge Cosmos will face.

“We can use Swallows as an example. Once you go down to the lower leagues, it is very difficult to come back and I don’t think that they will immediately.”

Rabutla also reminisced on the good old days when Cosmos mixed and competed on par with the big boys.

“He [Sono] discovered me while I was with Rabali Blackpool in Thohoyandou where I played with guys like Cyril Nzama, Andrew Kondwe, Mike Maringa and MacDonald Mukansi.

“We played a friendly match against Cosmos where we gave them a tough time and that’s where Bra J recruited me. He actually thought that I was a foreigner only to find that I am from Polokwane. He was surprised when he approached me to find out that I speak Sepedi.

“I enjoyed my time at Cosmos where we won trophies like the Bob Save Super Bowl, Coca-Cola Cup two times and the SAA Supa8 and we had a very good team at that time.

When he retired from playing Rabutla, who was part of the Bafana Bafana team that played at the 1998 Africa Cup of Nations in Burkina Faso under Sono and Trott Moloto, became team manager of Cosmos.