Nange concedes he's not hit top level yet for Chiefs 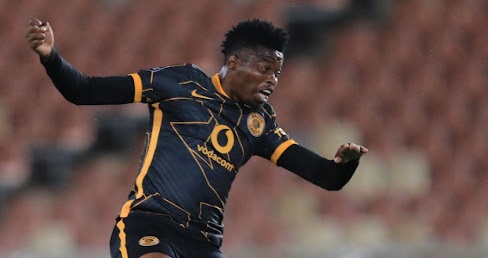 Nange is expected to anchor the Chiefs midfield when they host Golden Arrows in a league match at FNB Stadium tomorrow (7.30pm). The 30-year-old midfielder hasn't been entirely satisfied with his contributions since he arrived at Naturena. Nange has just netted once from 19 outings across all tournaments.

"If I were to rate myself out of 10 since I joined the club, I would give myself a five or a six. I think I have to offer more than I have done. I believe I can do better... I am not yet at my best. I want to make sure that I score more goals and give more assists,'' Nange told Sowetan yesterday.

"Last season I scored five goals [from 23 games] in all competitions [for Stellenbosch] and during my days at Black Leopards I used to score six to seven goals a season, so that's why I say I haven't really done that well here at Chiefs but I am working very hard to reach the level where I will certainly say I feel I am doing well.''

Chiefs' last game was a 2-1 win over rivals Orlando Pirates on March 5, meaning by the time they face Abafana Bes'thende tomorrow they would have had a 13-day break. Nange is adamant the hiatus hasn't blunted their momentum.

"We've been doing intensive training and we also played a few friendlies, so we're believe the momentum is still there. The break helped us to rectify some of the mistakes we'd been doing. The coaches also tried out a few combinations. We had enough time to get ready for Arrows, that's why we are confident that we'll do well,'' Nange said.

Unlike his coach Stuart Baxter, who made it known he believes they are the only side who can challenge leaders Mamelodi Sundowns in the title fight, Nange wasn't keen to be drawn into the title talk.

"We are focusing on each game that comes our way. We can't be talking about titles because there are still a lot of games to play,'' Nange insisted.

Ahly used the Chiefs training ground just for one session in preparation for their CAF Champions League group fixture against Mamelodi Sundowns, and ...
Sport
3 months ago

Orlando Pirates will be looking to secure their place in the CAF Confederation Cup knockout phase when they meet JS Saoura at Stade du 5 Juillet ...
Sport
3 months ago

Avoiding a defeat against Al-Hilal in their penultimate CAF Champions League Group A clash in Sudan tomorrow is the easiest route Mamelodi Sundows ...
Sport
3 months ago

France coach Didier Deschamps has named a strong squad for the friendly against Bafana Bafana in Lille later this month including N'Golo Kante, Paul ...
Sport
3 months ago
Next Article