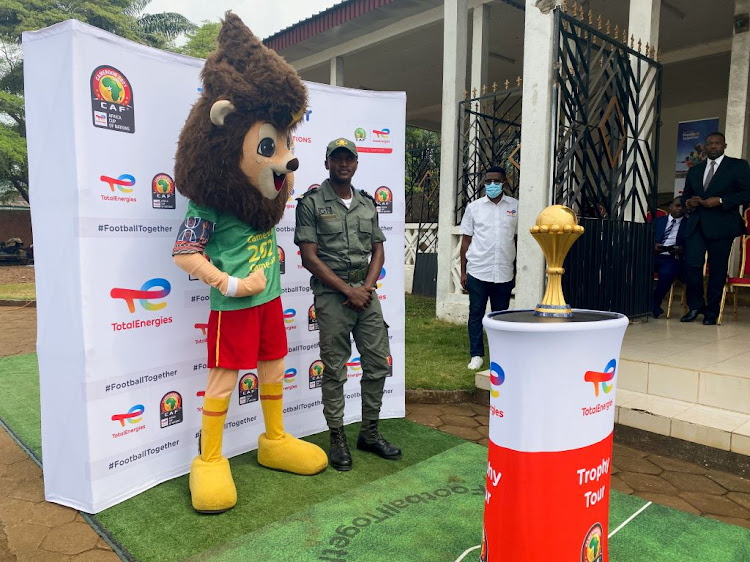 A security forces member poses with the Africa Cup of Nations mascot during the presentation tour of the Cup in Limbe in Cameroon.
Image: REUTERS/Josiane Kouagheu

Covid-19 infections have caused more disruption to African Cup of Nations preparations, with Senegal delaying their departure for the tournament in Cameroon and Burkina Faso set to miss players in Sunday’s opening game.

Cape Verde Islands and Tunisia also reported new positive cases and Ivory Coast were forced to cancel a second warm-up match at their training base in Saudi Arabia. Hosts Cameroon have a full complement training again after players returned from quarantine.

Burkina Faso left three players isolating in Abu Dhabi before arriving in Yaounde to  face Cameroon on Sunday. Issoufou Dayo, Dramane Nikiema and Kylian Nikiema will be allowed to travel after they return negative tests and are almost certain to miss Sunday’s match, officials said.

Malawi left for Cameroon on Wednesday but also left behind three players in isolation. Defender Mark Fodya, midfielder Charles Petro and striker Richard Mbulu stayed in Jeddah in Saudi Arabia and will be retested on Thursday. If they test negative, they are scheduled to travel on Friday, a football association statement said.

Senegal are among the tournament favourites. The team's departure was delayed after suspected positive cases in their delegation and all are being subjected to retesting, local media reported.

Senegal are without a complete squad, with most of their European-based players reporting only this week, including Sadio Mane and Ismaila Sarr. Cape Verde Islands, who like Senegal have been home-based for their pre-tournament training, said coach Bubista had tested positive for Covid-19 and had been placed in isolation ahead of their planned departure on Thursday.

Their preparations have been hit by 21 positive tests among players and staff though a football federation statement said five players were training again, three were in isolation and eight more were testing positive but without any symptoms. Defender Michael Ngadeu Ngadjui and midfielder Pierre Kunde, who went into isolation last week after testing positive for Covid-19, are back training for Cameroon.

Tunisia reported their captain Youssef Msakni and striker Seifeddine Jazizi had tested positive, and a friendly between the Ivorians and Mali in Jeddah is off because of positive cases in the Ivorian camp, media reports said.