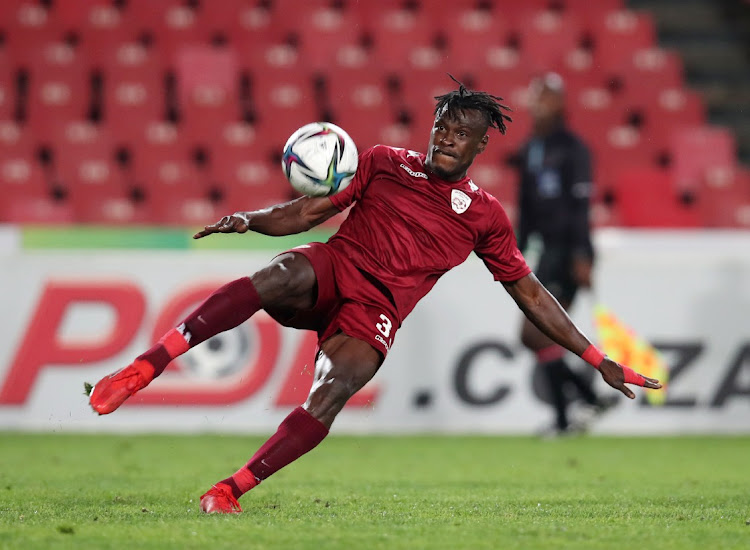 Being one a few players who have started in all the league games thus far has motivated in-form Sekhukhune United defender Edwin Gyimah to keep this record until the last game of the campaign.

Gyimah, 30, has been in the XI in Sekhukhune’s 11 league outings this season, and the well-travelled centre-back wants to start in all the remaining 19 games this season.

“I feel privileged to have played all the games so far because there are a lot of players who could have been preferred. Each and every player is hoping for more game time. It’s my intention to be in the XI in every game. It would be nice to play all the 19 games from now,” Gyimah told Sowetan.

The Babina Noko defender, who can be hard when he tackles at times, aims to be disciplined to stave off suspensions to realise his aspiration to play all 30 games. Gyimah hopes God will help him to stay injury free. He's yet to be yellow-carded this season.

“There could be injuries and yellow cards... I know but I will try by all means to be disciplined so that I will never miss action. I will keep on praying that I don’t get injured because that’s out of my control but God can help me in that part,’’ said Gyimah.

Given his troubled past, many had already written Gyimah off when he joined Sekhukhune at the start of the season. The Ghanaian joined as a free agent after leaving Black Leopards.

In 2016, while still at Orlando Pirates, Gyimah had an altercation with coach Muhsin Ertugral. At Leopards he once left the club’s camp’s bio-bubble without permission.

Gyimah attributes his well-documented behavioural problems to personal issues he endured then, insisting he has resolved them, hence his impressive performance at Sekhukhune.

“People doubted that I have changed when I joined Sekhukhune. Back then I had many problems in my life. I had some spiritual problems and I had to go to Ghana and fix everything. Now all is in the past... I am only focusing on football because I have no personal problems like before,” Gyimah said.

Ten-man Kaizer Chiefs allowed an opportunity to reduce Mamelodi Sundowns' imposing DStv Premiership lead slip though their hands when they spurned a ...
Sport
2 months ago

SuperSport United launched a spirited second-half fightback to force a 2-2 draw with Mamelodi Sundowns during their exciting Tshwane derby at Loftus ...
Sport
2 months ago

Kaizer Chiefs will know that they can get themselves back into the title race reckoning if they can get a third DStv Premiership win in succession ...
Sport
2 months ago

Swallows have denied speaking to coach Gavin Hunt as a possible replacement for under-fire Brandon Truter at the club.
Sport
2 months ago
Next Article