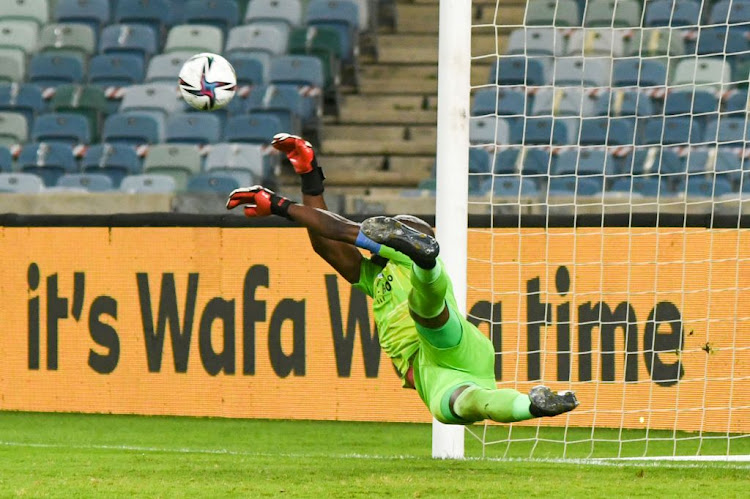 Denis Onyango of Mamelodi Sundowns makes a save during his side's penalty shootout against Cape Town City in the MTN8 final at Moses Mabhida Stadium on October 30 2021 in Durban.
Image: Darren Stewart/Gallo Images

Cape Town City coach Eric Tinkler was left disappointed by the quality of the penalty takers' kicks after the Mother City club lost in the MTN8 final following a poor display during the tense shootout at the Moses Mabhida Stadium on Saturday night.

Sundowns beat City 3-2 on penalties in an incredible  shootout that saw only five out of the 14 kicks taken by the two sides in sudden death converted. The two teams had played to a  1-1 draw after 120 minutes of football during regulation time.

Sundowns opened the scoring in the first half through Thapelo Morena and City equalised in the second half through Fagrie Lakay. Goalkeeper and captain Denis Onyango was the hero for Sundowns as he saved the penalties of Khanyisa Mayo, Fagrie Lakay, Abdul Ajagun, Tariq Fielies and Thamsanqa Mkhize.

The only City players to beat an inspired Onyango during the shoot-out were Terrence Mashego and Mpho Makola in what turned out to a poor exhibition of penalty-taking in front of about 2,000 people who were allowed to attend the match.

Sundowns scored from the spot through Andile Jali, Neo Maema and Peter Shalulile while Haashim Domingo, Sibusiso Vilakazi, Aubrey Modiba and Mosa Lebusa could not find the back of the net.

An unimpressed Tinkler said both teams performed abysmally from the penalty spot.

“It was poor from both teams when you think about it,” he said.

“Five missed penalties from our point of view is a lot and the quality of the penalties needed to be better. Having said that, you have to congratulate Denis Onyango because he guessed right for almost every penalty.

“Some credit must go to him (Onyango) but at the same time I thought my goalkeeper Hugo (Marques) was also phenomenal with the number of saves he made during open play and in the shootout.”

During the shoot-out, Marques saved the penalty of Modiba, Domingo and Vilakazi while Lebusa hit the woodwork.

“The problem with penalties is that at training it is a completely different situation because there is no pressure. At training it is easy. I will step up, take it and have a laugh afterwards, but I can’t recreate that in a match situation.

“Nine times out of 10, you sit at training and say this one is good, that one is good and then come penalty time during the match, they say 'coach no, I don’t want to take it.'

“You can’t replicate it and that’s the difficult part. Having said that, I was very proud with the performance of my team and the fact that we managed to give us a chance during the penalties.”

Though he was not pleased with the way they took their penalties, Tinkler praised his players for pushing Sundowns all the way, even though they lost defender Nathan Fasika after he was sent to an early shower in the 106th minute.

“I am happy with the team’s performance because we responded positively and took Sundowns all the way to the wire. Even when we went down to 10 men during extra time, we worked hard and were one penalty away from winning this."

When Shalulile scored the winning penalty, Onyango looked to have moved out of his line, but Tinkler did not want to talk about it.