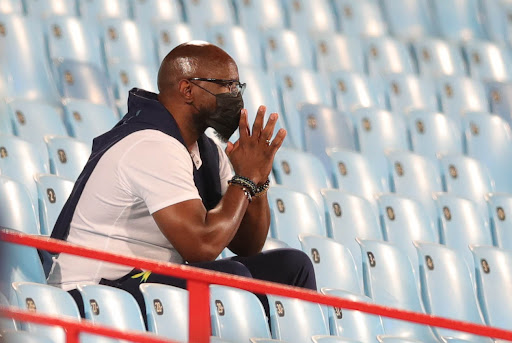 Mamelodi Sundowns senior coach Steve Komphela went to sit in the stands after he was red carded.
Image: ©Samuel Shivambu/BackpagePix

Mamelodi Sundowns co-coach Rulani Mokwena says he does not know what his colleague Steve Komphela said to the match officials that led to his sending off from the bench during a DStv Premiership match against Swallows on Sunday.

Komphela was given his marching orders after the senior Sundowns coach received two yellow cards in quick succession as the champions thrashed Swallows 3-0 at Loftus with goals from Pavol Safranko, Peter Shalulile and Neo Maema.

Julia Stuart, reporting from the pitchside for the TV broadcaster SuperSport during the match, said Komphela was cautioned by referee Thando Ndzandzeka for apparently constantly stepping out of the coach’s technical area having reportedly been repeatedly told not to do so.

Komphela appeared to still be remonstrating with the referee when he was given his marching orders.

Mokwena, who usually sits an arm’s reach away from his co-coach Manqoba Mngqithi and senior coach Komphela, claimed to not have heard what led to the  sending off.

“On coach Steve’s send-off, I was on the opposite side of the bench at that moment and I am not so sure what exactly happened,” said Mokwena.

“It becomes very difficult to then conclude and share my feelings without knowing really what happened.”

Mokwena said Sundowns will investigate and see what course of action to take if there is a need to do so.

“I think we will find out from him and find out as a club, and I think the club will deal with the matter if it needs to be dealt with.

“But this is football you know, we all in certain moments wear our hearts on our sleeves. We know how passionate coach Steve is, how much he loves this club and is prepared to fight for every situation.

“I don’t see anything wrong with that and to be honest, as I said I don’t know enough to conclude on the matter.”

Sundowns, who lead by four points at the top, played their sixth Premiership match without conceding a goal as they swept Swallows aside to move to 16 points from a possible 18.

“Not the best of performance [on the day] with still a lot of unforced errors, but we did enough to win the match and congratulations not just only to the players but to the technical staff, as well as coach Manqoba, coach Steve, coach Wendell Robinson and the rest of the support staff.”

Mokwena was pleased with the victory over Swallows after the Soweto club held them to two draws last season.

“This is a good victory against a team that gave us a lot of problems last season.

“We move into the next Fifa break and after that we have got a Caf Champions League match, so good.”

They next play Congolese side AS Maniema Union in Kindu in the Caf Champions League after the Fifa international break on Sunday October 17.