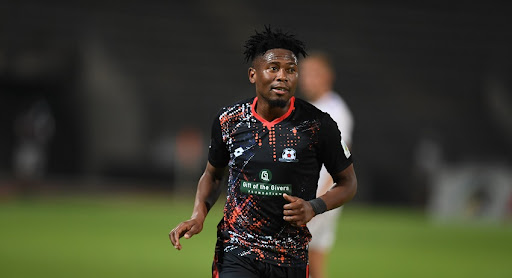 Maritzburg United striker Lifa Hlongwane has asked his teammates to pull up their socks and improve their performances if they are to challenge for a place in the top 8 at the end of the season next year.

The 27-year-old former Black Leopards player knows the pain of being relegated and has vowed to sharpen his side’s strike force in a bid to use the goalscoring opportunities they create.

Hlongwane is determined to have a successful campaign with the Team of Choice despite having lost 2-1 to SuperSport United at the weekend.

“Looking at the players, the energy the new guys are bringing, I think we should compete for the top eight,” he said.

“As an attacker I have to create and score goals for the team, so I’m here to add value in that respect.”

Hlongwane believes he’s at the right team to revive his career and there’s so much to learn from former Kaizer Chiefs mentor Ernst Middendorp.

“It feels great working under coach Ernst Middendorp, I am learning a lot from him and feeling great to be here,” he said.

He also revealed that adapting to the  environment in Pietermaritzburg was not hard as  he had played for KwaZulu-Natal side Royal AM when the team was campaigning in the lower tier.

“I’m happy to be back in Pietermaritzburg - it’s not my first time here. I was here before with Royal Eagles, now Royal AM, playing in the First Division, so I’m familiar with the city.”

Middendorp's charges are ninth on the standings with six points from five games.

Maritzburg will visit high-flying Royal AM in the DStv Premiership next weekend.