Mosimane on Chiefs star Mashiane's red card: 'You should not be reckless if you play the cup final' 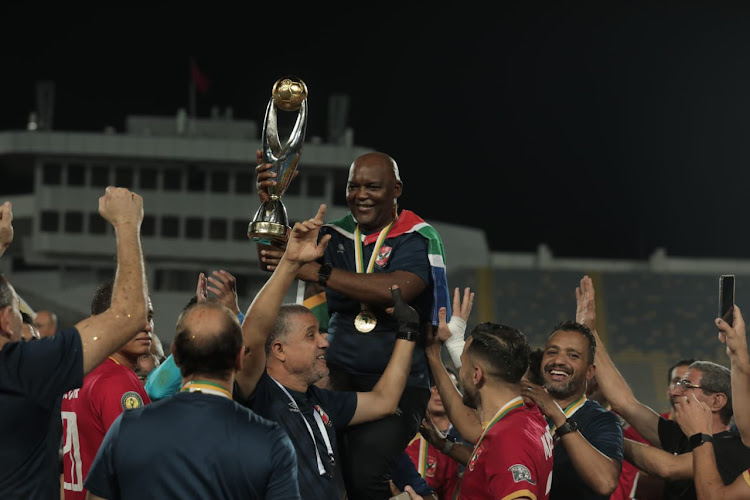 Al Ahly were hungrier for their 10th Caf Champions League final‚ and ultimately the class of a team who had convincingly reached the final showed through in their 3-0 win against Kaizer Chiefs‚ Red Devils coach Pitso Mosimane said afterwards.

Mosimane acknowledged that Happy Mashiane’s dismissal in first-half added time at Stade Mohamed V in Casablanca was a blow to a Chiefs who were already rank underdogs in the final‚ but said that was part of contending with the pressures of the occasion.

Chiefs‚ who had never reached a group stage‚ gritted their way to their historic first final with a 4-3 aggregate quarterfinal win against Tanzania’s Simba SC‚ then unashamedly defended for 180 minutes of their 1-0 semifinal shock of Wydad Athletic.

Defending and nine-time champions Ahly powered past Mosimane’s old club and 2016 winners Mamelodi Sundowns 3-1 in the quarters‚ and Esperance de Tunis 4-0 in the semis. That they then also convincingly saw off Chiefs in the final was not a surprise‚ said Mosimane‚ and just reward for the most convincing team of the competition.

“We really needed this trophy. I know the team from my country also wanted their first star‚ but we needed it and we wanted it more than them‚” the coach‚ who became the second-highest winning coach in the competition with his third title‚ said.

“The 10th one is important – it’s good for our history and for our archives. And how better to do it than with three goals.

“Yes‚ I understand that there was a red card. But the red card is part of football – you should not be reckless if you play the cup final.

“You should not be too emotional. And this happens in football.

“So congratulations to the team – Al Ahly deserve the 10th trophy to make history.”

Rank underdogs Chiefs‚ in their first Champions League final having never previously reached the group stage‚ held their own in the first half but had attacker Mashiane sent off in added time for a rash challenge on Akram Tawfik.