Tlale reckons Bafana coach had small pool to choose from 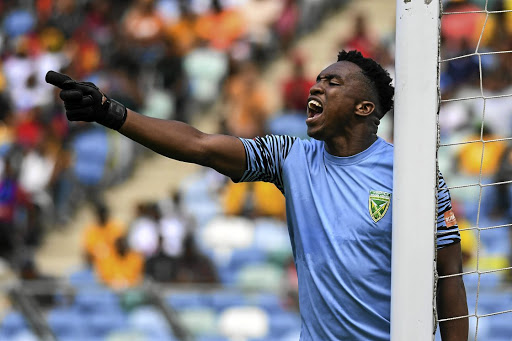 The presence of off-form Kaizer Chiefs goalkeeper Itumeleng Khune in the Bafana Bafana squad may have set tongues wagging, but a closer look at SA's goalkeeping pool suggests coach Molefi Ntseki had little choice but to select him.

Current No.1 Ronwen Williams of SuperSport United and AmaZulu’s Veli Mothwa, who’s in the national team for the first time, are the other keepers selected for Bafana’s last two 2022 Africa Cup of Nations (Afcon) qualifiers against Ghana at FNB Stadium tomorrow and away to Sudan three days later.

Aside from leaking a whopping 13 goals from seven league games with not even a single clean sheet, the 33-year-old Khune has committed some glaring howlers this season, making his selection even more controversial if not hilarious. The inactivity of Darren Keet, who’s unattached after leaving Belgian club OH Leuven last October, contributed to coach Ntseki selecting an underperforming Khune.

Local keepers who may have been called in Khune’s slot are either struggling for game time at their clubs or they lack that experience at national team level.

After receiving a few call-ups during his days at Bidvest Wits, Ricardo Goss was seen as one of the heirs to the Bafana No.1 jersey. However, his move to Sundowns, where he’s struggled to dethrone Uganda keeper Denis Onyango, who’s kept the most clean sheets (11 from 17 games) in the league, has divested him of a place in the national team.

Arrows’ Sifiso Mlungwana has shown flashes of brilliance this season, raising hopes he could be a Bafana material in future. He’s currently earning his stripes with the Under-23 side as they're in camp in Durban, preparing for the Olympics. Mlungwana, 23, is level with Williams and Mothwa on six league clean sheets this season.

Khune’s age compeer Jackson Mabokgwane of Bloemfontein Celtic, who boasts 11 Bafana appearances, is another option but niggling injuries look to have disadvantaged him this time around.

Other possible alternatives like Black Leopards’ King Ndlovu and Oscarine Masuluke of Baroka have been arguably  in worse form than Khune and their inexperience on international stage made things even harder for them to be considered.

“We have a big problem when it comes to keepers, so I’d rather have Khune than have a young keeper because these Afcon qualifiers are crucial. We must not forget what Khune is capable of. Even if he doesn’t play, his presence is important because he can motivate other keepers.’"

Bafana Bafana coach Molefi Ntseki’s own squad plans have not just been thrown into disarray by European clubs refusing to release players‚ but also ...
Sport
1 year ago

Rangers midfielder Bongani Zungu will join Bafana Bafana for their second crucial Africa Cup of Nations qualifier against Sudan in Khartoum on ...
Sport
1 year ago

Bafana Bafana have been hit hard by Covid-19 travel restrictions imposed by countries abroad ahead of their crucial 2021, Africa Cup of Nations ...
Sport
1 year ago
Next Article