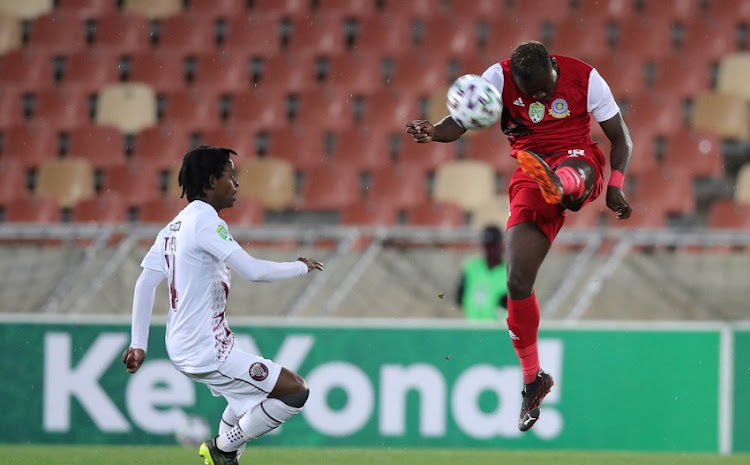 Tshakhuma Tsha Madzivhandila (TTM) progressed to the quarter-finals of the Nedbank Cup with a 4-3 penalty shoot-out win over Swallows at the rainy New Peter Mokaba Stadium in Polokwane on Friday night.
Image: twitter/swallows

Tshakhuma Tsha Madzivhandila (TTM) progressed to the quarter-finals of the Nedbank Cup with a 4-3 penalty shoot-out win over Swallows at the rainy New Peter Mokaba Stadium in Polokwane on Friday night.

They could not be separated after 120 minutes as they were tied at 2-2 with TTM scoring through Thabo Mnyamane and Rhulani Manzini while Swallows found the back of the net through Sipho Sibiya and Vuyo Mere.

During the shoot-out, TTM scored through Alfred Ndengane, Joseph Molangoane, Brandon Theron and Meshack Maphangule while Phineas Ravhuhali was saved by Virgil Vries.

For Swallows, Ruzaigh Gamildien, Lebohang Mokoena and Daniel Gozar converted from the spot but the experienced duo of Mere and Musa Nyatama were denied by Washington Arubi.

TTM opened the score after 18 minutes with a thunderous free-kick by Mnyamane that gave goalkeeper Vries no chance after Manzini was brought down by Sibiya.

Swallows equalised three minutes from the half time break with the close range header of Sibiya who connected with a well taken free-kick from Joseph Mhlongo but he couldn’t celebrate the goal as he hurt himself in the process.

Referee Masixole Bambiso stopped the match temporarily as Sibiya received medical attention after his upper body collided with the near side upright when he leveled matters.

TTM increased their lead five minutes after the break with a diving header from Manzini who connected with a well-taken cross from Botswana international Mogakolodi Ngele that came from outside the box.

Swallows leveled matters again after 75 minutes from a well-taken volley of veteran defender Mere after TTM failed to deal with a dipping free-kick from Gamildien.

TTM won a penalty shortly before the break of extra-time when Sifiso Hlanti brought down Molangoane but Vries dived the way to deny Meshack Maphangule’s tame effort from the spot.

In the other last 32 match played on Friday, Cape Town All Stars beat Cape Town Spurs 5-3 on penalties as they were tied on 3-3 after extra-time during their all GladAfrica Championship clash.