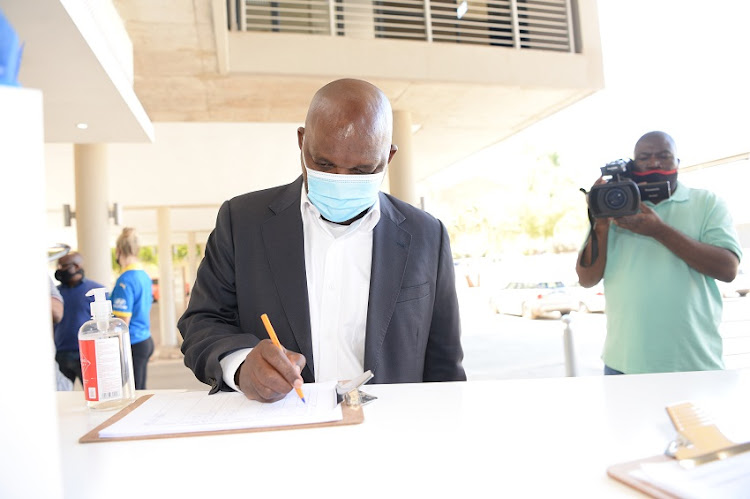 The year 2020 globally was‚ as anyone who has not been living under a rock‚ and in this year one would not blame anyone for having actually found a nice boulder to bury oneself under‚ actually simply indescribable.

The Covid-19 pandemic – and Donald Trump – saw to that. So it's not surprising that even in SA football‚ in this craziest of years‚ there was plenty of mad stuff going on.

TimesLIVE explores five insane things that happened to SA football in the crazy year 2020‚ and yes‚ they are ranked in this order:

5. Absa ends its sponsorship of the Premiership

Since the pre-2010 World Cup financial bubble hit South African football‚ the country's top-flight league has been synonymous with the name the Absa Premiership. In 2007 Absa signed a deal worth a then-staggering R500-million over five years to sponsor the top-flight. On June 4‚ in the midst of the league's shutdown due to Covid-19‚ the news broke that the bank would not renew its latest three-year contract‚ which had grown to being worth R140-million a year‚ and was ending its 16-year relationship with the PSL.

Professional football in SA need not fret financially‚ though‚ as the PSL's broadcast partner quickly stepped in as the new headline sponsor too once the extended 2019-20 season ended in September‚ and on September 24 the DStv Premiership was born.

Absa has been the official sponsor for the PSL for many years and has played an important role towards the growth of football in South Africa. Dr Irvin Khoza, the PSL chairman, has announced DStv as the new sponsor for the Premier Soccer League (PSL).

4. Bidvest Wits and Ajax Cape Town are no more

In a normal year this might have been the biggest story of the year. In 2020‚ it sits at No. 4. But make no mistake‚ the loss of these two brands to SA football is immense in impact‚ and the fallout will be long-lasting.

Bidvest Wits' sale to Lawrence Mulaudzi‚ who has renamed the team to that of his ex-First Division combination Tshakhuma Tsha Madzivhandila and relocated it to Limpopo‚ first came to light in late May‚ and became official in June. The deal was controversially handled as it was felt that Bidvest could have found a buyer who would preserve Wits University - a 99-year-old club - in the First Division‚ and the PSL should have insisted on it. Instead a club that won the league in 2016-17‚ and had become highly competitive under Gavin Hunt‚ was lost to SA football just before it turned 100.

Ajax Cape Town's failure for a second season to be promoted back to the Premiership from the NFD in 2019-20‚ and a season that included the controversial firing of coach Andries Ulderink and head of football Hans Vonk‚ seemed the last straw for mother club Ajax Amsterdam. After a 21-year relationship - which had seen the Cape outfit churn out talent from its academy‚ win three cups‚ and finish PSL runners-up three times - the Dutch giants cut their ties on September 28‚ and Ajax Cape Town owner Ari Efstathiou renamed the team Cape Town Spurs.

Again‚ in a normal year Covid-19 would be the biggest story‚ but we have it at No. 3. Certainly‚ though‚ nothing has ever been seen like it. A five-month halt in the 2019-20 season‚ the scrambling by health experts and politicking between the Premier Soccer League and SA Football Association to find a solution for a safe return to football that would please the government‚ and eventually the Gauteng bio-bubble. The Instagram videos of players running around their yards‚ and keeping each other entertained on internet socialising applications‚ and Zoom press conferences.

And the long-term affects‚ as the pandemic continues to rage globally and the new normal of empty stadiums and isolated squads continues‚ can probably only be properly quantified once a vaccine takes effect and this thing called Covid is no more.

In the craziest of seasons‚ delayed by Covid-19‚ and finishing in a World Cup format in Gauteng's bio-safe environment‚ Kaizer Chiefs had been the unlikely leaders from almost day one. They rode the wave of their 50th anniversary season‚ showed desperation to end four previous seasons trophyless‚ playing awkward football under journeyman coach Ernst Middendorp and wracking up one result after another.

Things had got tougher for Amakhosi in the bio-bubble‚ and Pitso Mosimane's trophy machine Mamelodi Sundowns had of course reeled them in. By the final day‚ though‚ Chiefs had clawed onto the Premiership lead by a point.

Khama Billiat duly gave Chiefs the 39th-minute lead at Bidvest Stadium against relegation-threatened Baroka FC and history beckoned. But then the dream crumbled. Chiefs conceded softly in the 59th to Mozambican midfielder Manuel Kambala’s header. At Dobsonville Stadium Sundowns strolled to a 3-0 win against Black Leopards and lifted their 10th PSL title.

All four of the above events were bombshells‚ but Pitso Mosimane's dramatic departure from Sundowns blew them out of the water like a depth-charged U-boat in the biggest story in SA football not just of 2020‚ but perhaps the last 10 years.

Mosimane and Sundowns owner Patrice Motsepe announced a new four-year contract for the coach in a televised press conference in May. The former Bafana Bafana striker had won the 2016 Caf Champions League and Super Cup‚ four league titles (and challenging for a fifth) and four cups at Downs. He had made them a consistent force in the Champions League. He was going nowhere.

When the story broke on TimesLIVE on the morning of September 30 that Mosimane was leaving to join Al Ahly‚ many on social media would not believe it. It was confirmed later that day by statements from the coach and Motsepe.

The allure of coaching Africa's biggest club‚ amidst some apparent issues at Downs‚ proved too great a temptation for Mosimane. The move has proved a spectacular hit. Ahly cannot lose‚ and have wrapped up a league title already won under Swiss predecessor Rene Weiler in style‚ adding the 2019-20 Champions League and Egyptian Cup.

Mosimane's six trophies in a season – a Covid-19 anomaly involving Egypt's league being postponed longer than SA‚ and because he had wrapped up a treble at Downs too before leaving – must be some sort of world record. It ensures that as things get tougher in his first full season at the Red Devils‚ he is riding a wave. What a fascinating story this will be as it continues to unfold.