EFF's ultimatum to Safa: no Bafana matches in SA unless Banyana are paid R50 000 appearance fee each 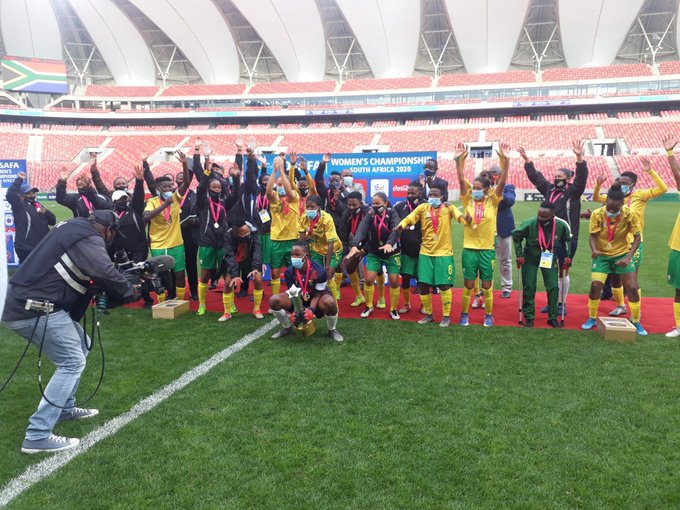 The Economic Freedom Fighters (EFF) have delivered a list of demands to the SA Football Association (Safa) that include an appearance fee of R50 000 and a bonus of R90 000 to be paid to the Banyana Banyana players when they represent the country.

The EFF threatened that there would no Bafana matches played in the country if Safa fails to comply with their demands within 30 days.

The demands were contained in a memorandum that was presented to Safa vice president Gladwyn White at Safa House‚ in Nasrec‚ on Wednesday as the EFF forges ahead with the fight for the Banyana and Bafana Bafana to be paid the same amount.

EFF members‚ who were led by their deputy secretary-general Poppy Moiloa and commissar Sharon Letlape‚ picketed outside Safa House and were joined by outspoken former Banyana Banyana captain Portia Modise.

Modise is a long-time critic of Safa and has often called out the mother body for the poor treatment of women’s football over the years.

In the memorandum‚ the EFF are also demanding that Banyana players must be paid daily allowances of R5000 and that money must be in dollars if they are playing outside the country.

They are also demanding for the establishment of a fully-fledged and first-class women’s football league and the provision of medical support‚ specialist and compensation of R30 000 each for players that are injured on the field until full recovery.

“Banyana Banyana are regarded as second class citizens who are in sports so that they can satisfy the national project of ego easing of those who run the association in their demand to appeal as progressive‚” said Moiloa.

“It is evident that women in sports in this country are not taken seriously. Sportsmen are valued and often idolised‚ while women with the same capacity and achievements are disregarded and are not afforded the same acknowledgement‚ recognition and empowerment both in terms of financial injection and social capital.

“Bafana Bafana and the South African cricket team have been excellent and exceptional failures for the last decade. They have embarrassed our country on both domestic and international stages but are still celebrated as if they bring glory and pride to our nation.”

Safa chief executive Tebogo Motlanthe confirmed that they have received the memorandum.

“We have received the memorandum and we are committed to meet with them and discuss [further] because [with] some of the issues‚ there needs [to be] a round-table discussion‚” said Motlanthe.

1. Equal pay for Banyana Banyana as compared to Bafana Bafana.

2. Daily allowance of R5000 to be paid out to the players prior to the game and in dollars where the match is outside of South Africa.

5. Organise travel logistics for players to and from their respective homes between matches.

6. Players must be provided with their own personal and private sports gear to maintain a high level of hygiene.

8. Provide medical support‚ specialist and compensation of R30 000 for players that were injured on the field until full recovery.

9. Include in their contractual agreements a non-negotiable clause that sponsors must sponsor both national teams.

10. Equitable and reasonable compensation for all Banyana Banyana Legends for the past 20 years.