Siphiwe Tshabalala's on AmaZulu top four ambitions: 'It’s difficult but it can be achieved' 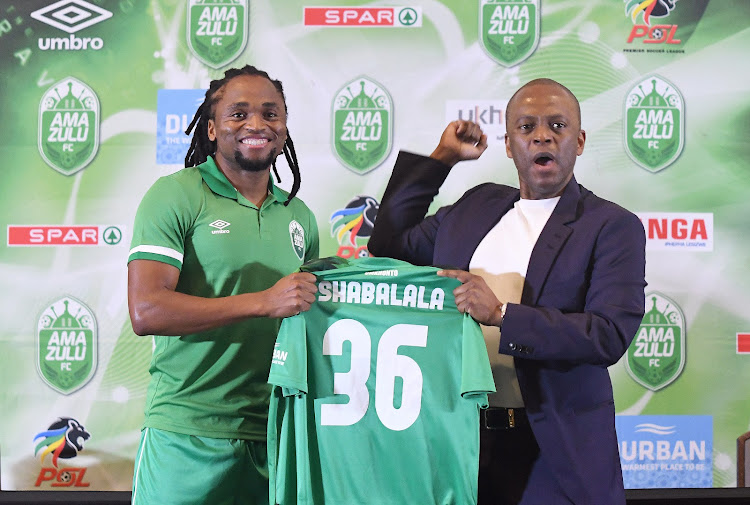 Ambitious AmaZulu owner Sandile Zungu has given his club the target of finishing in the top four this season and three new arrivals at the Durban side are well aware that they will be expected to shoulder the responsibility of carrying out this directive.

Luvuyo Memela, Siphiwe Tshabalala and Augustine Mulenga were among the raft of signings that were unveiled by the club this week and have a tough task on their hands as AmaZulu were wallowing in the relegation quicksand for the better part of last season.

Mulenga and Memela were struggling for game time at Orlando Pirates last season while veteran Tshabalala has not been attached to a club for more than a year since leaving Turkish outfit Erzurumspor, the side he joined in 2018 after leaving Kaizer Chiefs.

The three will see this new chapter as an opportunity to revive their careers and also fulfil their new employer's ambitions.

“I’m so happy to join AmaZulu and I thank my family for helping me make this decision because it wasn’t easy to choose AmaZulu.

"There were a lot of teams looking for me,” said the 30-year-old Mulenga.

“The reason I left Orlando Pirates is because I didn’t have enough game time and looking at this new season, they’ve signed [more] new players.

Mulenga made only 12 league appearances and contributed three goals to Pirates' cause last season.

Tshabalala said he held serious talks with Zungu and this then led to the surprise move to AmaZulu.

Zungu had outlined  the club’s ambition after he bought a 100% stake from the previous owners.

“He (Zungu) told me about his plan and vision for Usuthu. For me, it’s a new chapter and I hope I will make a difference,” said the 36-year-old who is famous for his Bafana Bafana’s outstanding goal in the opening Fifa 2010 World Cup match against Mexico.

“I wouldn’t say it’s impossible (to finish in the top four), it’s difficult but it can be achieved.

"I’m happy with the decision that I took and I’m here because I want to be here, not because I have to be here.

"I’m coming to a team that’s been struggling in the league for six or seven seasons. It’s a challenge for me [but] I’m up to the challenge as well.

“I’m still hungry and as long as I’m still on the field I will have that hunger in me, I will always challenge myself.”

The 33-year-old Memela also struggled with injuries in recent times and only got to feature in 16 league matches for Pirates club last season.

Memela hopes to revive his career with Usuthu.

“I’m very happy to be here, and the chairman's ambition has also motivated me.

"It didn’t take me long to decide to join the team,” said Memela who couldn’t agree new terms with Bucs.

“As the chairman said he wants to see us in the top four, but as a player you need to take one step at a time and remind yourself every day of the ambition. Anything is possible.”

AmaZulu open their 2020-21 league campaign against Pirates at the Kings Park Stadium on Sunday and other than Memela and Mulenga, there could more former Bucs players featuring in Usuthu’s starting line-up.

There were talks of AmaZulu also adding Xola Mlambo, the former Pirates midfielder, to the fold, but his signature is yet to be confirmed.