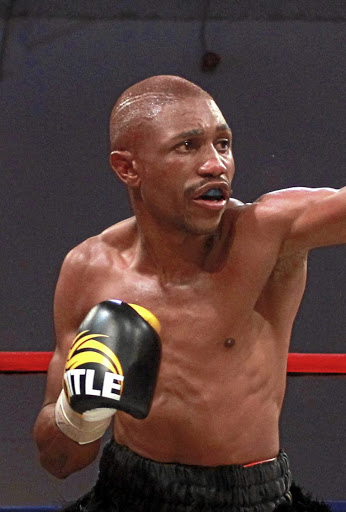 Thato “Captain Charisma” Bonokoane showed an impressive ability to remain calm despite having lost his mother a few days before he fought Doctor Ntsele at Klipspruit Sports Centre in  Pimville, Soweto, on Saturday afternoon.

The talented former South African junior featherweight champion from Kagiso, where his skills are polished by trainer Pius Dipheko, was told the sad news about the passing of his mother last Monday.

Bonokoane was supposed to have pulled out of the fight and head back home to be with the family until his mother was buried on Saturday. But the strong-willed fighter went ahead and toyed with ring veteran and former SA flyweight champion Ntsele, who was rescued in the fourth round by referee Simon Koali. That was after Ntsele had gone down twice.

He said his mother had succumbed to cancer. “I did all I needed to do, together with my brother, for our mother,” he said. “We had a long discussion before I entered into the bubble and she told us that we must continue with our lives even if something were to happen to her and that is what kept me going. I know for a fact that wherever she is, she is smiling after my victory. This happened to Buster Douglass just before he fought Mike Tyson, so I used that experience to the best of my mental ability and I am happy. I could feel my mother’s presence in the ring and I dedicated it to her.””

Douglass' mother had passed away 23 days prior to the biggest night of his life some years ago. He first buried his mother just days before he flew to Japan, where he shocked the world by knocking out Tyson in the 10th round.

Dipheko said: “I didn’t want a make a decision for him but I said I will support him in what he decided. I was surprised by how relaxed he was during the fight. I was very emotional myself. I thought my suspension by Boxing SA was also going to add to his frustration.”

Dipheko was suspended because he failed to enter into the bubble. He requested Charity Mukondeleli to man Bonokoane’s corner.

Dipheko won't be in fighters' corners because he did not enter bio-bubble.
Sport
1 year ago
Next Article