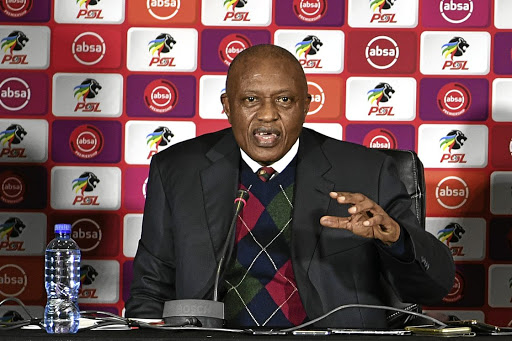 The Premier Soccer League (PSL) will struggle to repeat their feat of generating revenue of R1bn in this financial year due to the current economic downturn.

Back in November, the PSL was the toast of the town as the football body posted a record income.

However, much has happened since then as the coronavirus has ravaged the world economy and local football faces uncertainty.

Last week, Absa announced it will pull out at the end of the current season after its 16-year multi-billion rand sponsorship of the league, citing tough trading conditions.

The PSL is unlikely to receive that much cash this financial year after games were suspended in March.

Another blow to the PSL purse is the losses accrued from the non-broadcasting of games.

The Premier Soccer League (PSL) is frustrated that it has plans for a safe return to football that it would like to put to the government‚ but that ...
Sport
2 years ago

It is unlikely that the sponsor will contribute a similar amount now that games have been suspended for three months.

It remains a real possibility that the season will not be completed. The league is running out of time to get the teams into training camps and finish the remaining 54 Premiership games by July 31, with reports suggesting the long-running rift between league chairperson Irvin Khoza and Safa president Danny Jordaan is adding to the current impasse.

Should it be decided that the season be cancelled, the financial implications could be worse.

Another banking giant, Nedbank, could also demand its money back from the league if the Nedbank Cup is also not completed. There are three games (semis and final) remaining in the competition.

The arrival of GladAfrica as a sponsor for the league previously known as the National First Division was a boost for the organisation but the games in that league are also suspended.