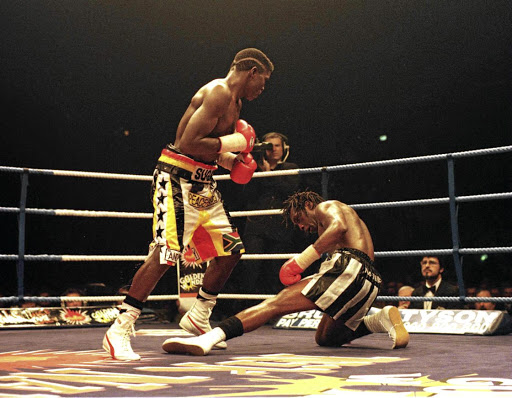 Thulani Malinga knocked down Nigel Benn in the 12th round to end his reign as the WBC champion in 1996. Benn has made a shock return to the boxing ring at the age of 55.
Image: John Gichigi/ALLSPORT Allsport

Local boxing authorities were left with egg on their faces after refusing to renew the licence of Thulani "Sugar Boy" Malinga to fight for a WBF super-middleweight title in Denmark on June 5 1998.

The former two-time WBC super-middleweight champion from Ladysmith in KwaZulu-Natal, who was trained in Johannesburg by Nick Durandt, says the board members on the SA National Boxing Control Commission said he was too old to renew his licence at 44.

"I went to Denmark where I was licensed and I stopped a 22-year-old [Fredrik Alvarez] who was the same age as my second-born daughter [Lethukuthula]," said the now 64-year-old Malinga yesterday.

Malinga's victory made him the third boxer in the world to win a world title when he was over 40. The first was American Bernard Hopkins who, at 45, won the WBC, IBO and WBC Diamond belts in the light-heavyweight class in 2011.

"I went out there to prove that age was just a number," said Malinga. "I came back and there was a tournament at Nasrec. The promoter wanted me to parade my belt inside the ring but the boxing bosses would not allow me to get inside the ring. I think they were embarrassed."

Malinga holds no grudges. Instead, he says hopefully the bosses learnt a lesson that they may be in positions of power but they cannot decide on behalf of boxers.

Malinga is the same man who wrote history by becoming the first local boxer to win the WBC belt in 1996 when the quick-fisted boxer dethroned Nigel Benn as the super-middleweight holder in England.

Malinga had previously failed to win the IBF belt from Lindel Holmes and the WBO belt from Chris Eubank.

"I was disappointed to lose to Holmes in Germany because I had been given motivation by Nelson Mandela, who sent me a telegraph from jail and wished me well," said Malinga.

Unsung boxing hero Jacob "9mm" Mofokeng - the first black South African heavyweight champion - stands resolute when it comes to his stance on whether ...
Sport
1 year ago
Next Article