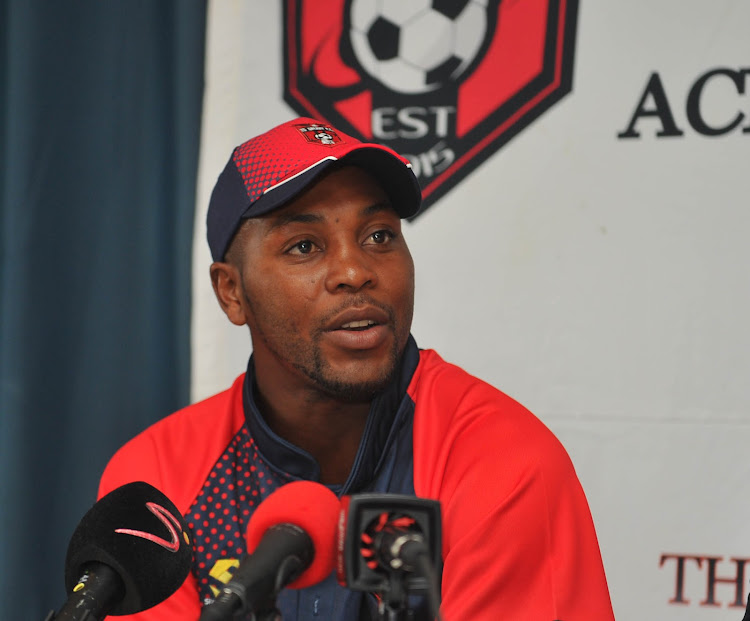 Mabhuti Khenyeza speaks to the media on February 18 2020 for the first time as head coach of TS Galaxy.
Image: Sydney Mahlangu/BackpagePix

Khenyeza handed his resignation in‚ reportedly via AmaZulu’s WhatsApp group‚ as assistant to then head coach Josef Vukusic in February to take the head coaching job of GladAfrica Championship team TS Galaxy.

Usuthu had initially said they would not take legal action against Khenyeza‚ but then last month sent a letter of demand for the former journeyman striker to buy himself out the remainder of his contract with the Durban team.

“From a club point of view the Mabhuti matter is a breach of contract matter that we have forwarded to the PSL DRC‚” Sokhela said.

“It was very disappointing the way that things turned out because we had a good‚ open relationship with Mr Khenyeza. So the way that we parted did leave a sour taste in our mouths.

“But we’ve taken the matter to the DRC and they will deal with it.”

Following Khenyeza’s departure‚ Vukusic was suspended in early March by the relegation-threatened AmaZulu and another assistant‚ Ayanda Dlamini‚ made caretaker-coach.

Sokhela said Usuthu were negotiating for a termination of contract for Slovakian Vukusic‚ but this ground to a halt with the onset of the coronavirus in South Africa‚ and subsequent national lockdown.

AmaZulu have repeatedly been linked to former Chippa United coach Norman Mapeza to come in as full-time coach.

Sokhela indicated this will not the the case‚ and Usuthu are giving their backing to former club striking star Dlamini.

“Things weren’t finalised [with Vukusic]. The process was still ongoing and then Corona came‚” Sokhela said.

“So for now we’re giving full support to Mr Ayanda Dlamini as caretaker-coach.

“As soon as things go back to normal‚ if there’s going to be such a thing‚ we’ll await for the chairman of the club [Patrick Sokhela] and the people who have been mandated to do the consultation to give us word on the way forward [on Vukusic's contract].”

AmaZulu were in 15th place when the PSL suspended matches on March 16.