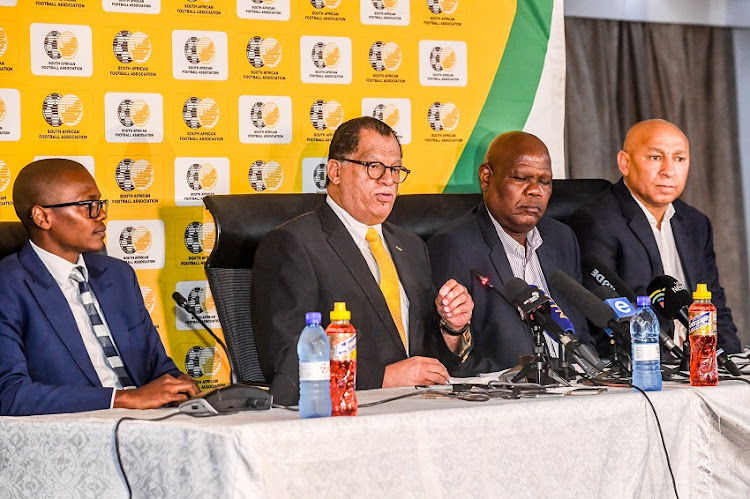 Danny Jordaan (President) of SAFA with Dr Thulani Ngwenya, Gaye Mokoena (acting CEO) and an executive member of SAFA as they announce cancellation of all football in South Africa during the SAFA press conference at SAFA House on March 18, 2020 in Johannesburg, South Africa.
Image: Sydney Seshibedi/Gallo Images

The South African Football Association (Safa) says they will follow president Cyril Ramaphosa's guidance before making any announcements on when the ban on football is likely to be lifted.

Ramaphosa will address the nation on Thursday night and is expected to shed some light on the possible relaxing of the national lockdown.

Safa banned all football-related activities in March amid the coronavirus pandemic and the mother body said in a statement issued on Thursday afternoon that they would wait for further announcements from the South African president before making any plans public.

“The announcement will give us an indication when it would be safe to resume domestic competitions. The prospect of resuming football competitions in South Africa will be largely influenced by our collective resolve to flatten the curve and reduce new infections and deaths.

“England indicated the determination to complete their league and therefore settle the final log standings.

"Suggestions in England are that because Liverpool is leading the log by more than 20 points‚ they should be awarded the title (their first in 30 years)‚ similar suggestions are being made here.”

Safa also indicated that South African football is at risk as it only has two major revenue streams through broadcasting and sponsorship while their counterparts in Europe have five.

“The broadcast revenue environment in South Africa has only one significant contributor‚ Supersport.

"The pay-per-view channel is therefore the biggest benefactor to South African football and also the greatest risk for SA football.

"SA football and sport in general (football‚ rugby and cricket) will have a major impact and subsequent loses if SuperSport's ability to continue to pay broadcast rights fees is compromised. We can therefore expect revenue losses of 40-60 percent to sport if this happens.”