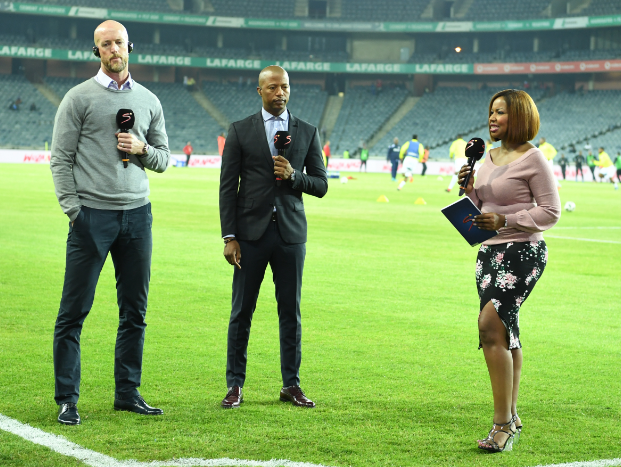 Television football pundits have also been left without work by the shutdown of the Premier Soccer League (PSL)‚ but most‚ being financially comfortable ex-footballers‚ appear far from a crisis situation.

The PSL has been suspended since March 16‚ and the subsequent national lockdown in response to the outbreak of the coronavirus pandemic in South Africa.

There has been speculation of closed-doors matches being played should the lockdown not be extended past April 16‚ but at present professional football remains in limbo‚ and this has also left TV soccer analysts out of work.

Pay-channel SuperSport employs the most ex-players as analysts.

Some with longer service‚ such as ex-referee Andile “Ace” Ncobo‚ are on contracts and have not been informed yet of plans for pay cuts.

Ncobo pointed out it was not just the pundits to think of‚ but also the entire production crews who service live match broadcasts and studio shows‚ some of whom are freelancers too.

“Most of the pundits rely on appearance fees. There are very few of us on contract who get a fixed amount‚” Ncobo said.

Most television soccer analysts‚ though‚ appear to be drawn from ex-footballers who have led stable off-field lives as players and have a nest egg‚ plus other employment‚ to tide them through the current crisis.

“Look‚ I think because it’s a global pandemic we need to look at it in the sense that it has affected everyone around the world.

"It’s not something that has affected one industry – it’s across all industries‚ and the human race at large‚” Tau said.

“For me‚ finance is not really the main priority. Yes‚ we are all losing money. But I think my health comes first.

“It’s beyond our control. Measures had to be put in place to deal with it and make sure we flatten that curve.”

Ex-Chiefs and Orlando Pirates winger Stanton Fredericks agreed that there are people in far more desperate situations from loss of income than television football personalities.

“I’m blessed to have other streams of income‚” Fredericks said.

“But I think this pandemic is bigger than individuals – celebrities and ‘people of importance’‚ and I say that in inverted commas. Because I think it hits the poor harder than we realise.

“Times like this make you understand that we live in a bubble. And being a footballer for 17 years‚ it’s only just before you end your career that you realise that you have been kind of forced to live in a bubble.

“You don’t want to attract the wrong friends‚ you don’t want to be too accessible‚ you need to try to be professional and you manage who you interact with. And you end up in a bubble.

“When you finish your career you realise that you’re not that important. There’s a world out there that doesn’t exist for football.

“And I think if I can put it in perspective‚ this time in the lockdown has made the affluent people realise that this bubble that you live in‚ actually there are so many more difficulties that people live with on a daily basis.

“And for footballers‚ football sometimes helped remove you from those difficulties. But the pandemic has shone a light in the imbalances in our society‚ and how people have to live.”

One pundit who works for the SABC said he did not want to comment as he was wary of the “politics” in the administration of the public broadcaster.