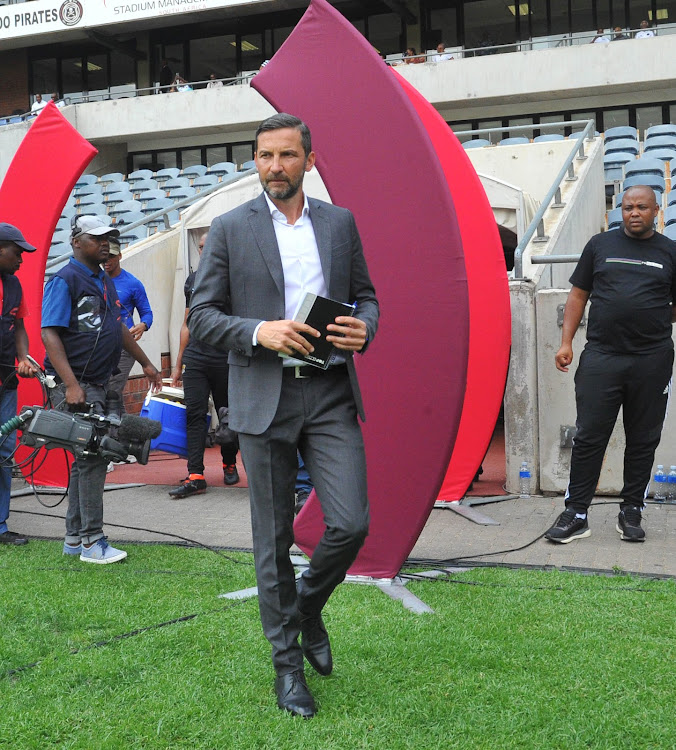 Orlando Pirates coach Josef Zinnbauer will aim to stabilise a Buccaneer ship that had hit rough seas in the opening half of the 2019-20 season.

Zinnbauer takes Pirates into their first game of 2020 against Bloemfontein Celtic at Dr Molemela Stadium on Saturday (kickoff 3.30pm) in – considering their unconvincing opening half of the season – a relatively comfortable fifth place in the Absa Premiership.

Their jump into the top five from being rooted in mid-table for the first half of the campaign came thanks to Zinnbauer being able to start with a 3-1 win against Black Leopards at Orlando Stadium in Bucs’ last game of 2019.

The result is perhaps not surprising – struggling teams often rebound with a positive result as players aim to make a good first impression on a new coach.

The performance‚ by Zinnbauer’s admission‚ left much to be desired following just a few training sessions with his new team replacing caretaker Rulani Mokwena.

The coach will have had plenty to work on during the league’s Christmas and New Year break‚ as he now seeks to implement his playing style more thrown in at the deep end as a coach completely new to South African football and the PSL.

“In five or seven training sessions it’s not so easy to change the all the systems‚” Zinnbauer said after that first win.

“I have a philosophy in my head‚ and there were little things and information that I gave the players [for the first game].

“But you cannot change the systems 100 percent‚ and give the inputs that the players need. We take this step by step. And then we improve the team in a new system.

“In just eight or 10 days you cannot assess all the players and work on everything that they need.

“The next step for me now is that we improve the players in their positions‚ and the most important is without the ball.”

Possibly the hardest part for Zinnbauer – who coached Hamburger SV in the Bundesliga and St Gallen in Switzerland – will be the quick adjustment he has to make to his new club and to the league.

The coach must get to know his squad and players‚ and their individual off-field personalities and on-field strengths and weaknesses. On top of that‚ he has to begin assessing the characteristics of all the teams Pirates will be playing against.

It is a big ask. It seems‚ with 2019-20 largely a write-off for Bucs‚ the 49-year-old German might be given the last five months to acclimatise‚ show signs of promise and improvement‚ and try to finish as high as possible in the league‚ and perhaps challenge for the Nedbank Cup.

Celtic have given their normal solid performance going to ninth place by Christmas under Lehohonolo Seema‚ and will be a difficult team to break down in front of their home support.