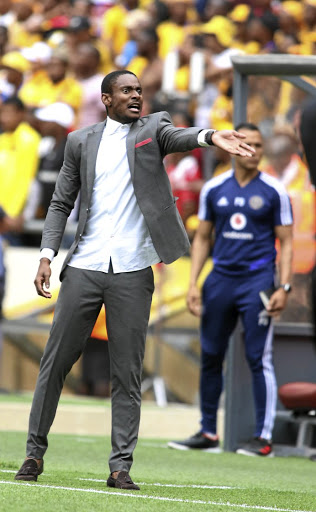 The usually measured Rulani Mokwena could not control his anger following Orlando Pirates' loss to Kaizer Chiefs in the Soweto derby on Saturday.

The Buccaneers have relinquished their dominance over Chiefs. Prior to Saturday's 3-2 loss, Bucs had not lost to Chiefs in regulation time since 2014.

Mokwena was not only displeased with the late scuffle that led to Mulomowandau Mathoho being red carded, but the winning penalty he felt was "a dive" by Bernard Parker.

"I try my best to control my emotions. I invest a lot reading on emotional intelligence and controlling them.

"The reality of the situation is that there was thuggish behaviour and we cannot condone that," Mokwena said.

"I have a player bleeding with a broken nose because he got punched in the face. If Chiefs are good enough to beat us on tactics, then excellent, but not on diving inside the box."

It was a drama-filled match on and off the pitch worthy of all plaudits. In the post-match, the antagonism continued as Mokwena and Chiefs' Ernst Middendorp continued to exchange words.

"I hear coach Middendorp saying he doesn't know what happened with the red card. It wasn't just Mathoho who deserved to be sent off.

"It's thuggish; it doesn't belong in our football. Even the Katsande's tackle on Makaringe, it was career threatening, and thuggish as well," Mokwena said.

Mokwena has been accustomed to enjoying dominance over Amakhosi as assistant to Milutin Sredojevic.

Since taking charge of the club in August after Sredojevic left, Mokwena has a record of three wins, five losses and five draws.