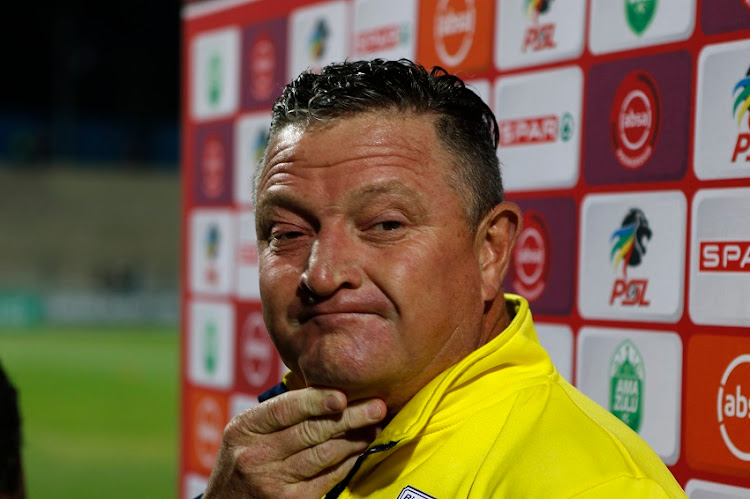 Gavin Hunt admits that it will be a battle challenging for league titles and trophies at Bidvest Wits with a tighter budget.

Wits continued their mystifying poor form at home from last season into their first fixture at Bidvest Stadium of the 2019-20 Absa Premiership‚ as they followed up a 3-0 away win against AmaZulu with a 1-0 defeat against Baroka FC on Tuesday night.

The club have had to tighten their belts financially in the new season‚ they have said.

Retrenchments in their office staff have reinforced that these are no longer the big-budget good times in which Hunt was able to build the Clever Boys’ first league title-winning squad of their 95-year history in 2016-17.

“We’ve spent no money and we haven’t brought in anybody. So I’ve got to battle along‚” Hunt said after his team’s defeat on Tuesday.

“But it is what it is. We’ve got good hard-working players. I think we’ve got some good players in for free. And that’s all I can I do.

“But‚ ja‚ an edge – we’re going to need an edge somewhere along the line.”

Hunt‚ and Wits as a club‚ have been known to inflate their pauper status in the past.

When the coach says he’s “brought in nobody”‚ that is a classic example of it.

The club have only bought one player‚ highly-rated Zimbabwean defender Farai Madhanhanga from FC Platinum.

But they have brought in another 10 on free transfers – Hunt and club CEO Jose Ferreira’s modus operandi – to add depth‚ even though many of the signings have the look of squad performers.

Brian Joffe‚ who had been Wits’ chairman‚ stood down as CEO of owning company Bidvest in September 2017. New CEO Alan Fainman is now club chairman.

Hunt could not disclose details of what Bidvest’s board have conveyed in terms of tightening budgets.

He would only say as an explanation: “It’s South Africa‚ isn’t it? It’s the economy in the country.

“People are losing jobs. Companies are cutting back everywhere. And it’s understandable.

“We are working in tough times. And football‚ obviously‚ is an industry where you will pull the plug first.

“I don’t know the ins and outs. But obviously things have been cut‚ and people have left for financial reasons.

“But I’ve got to worry about what’s going on in the field.”

Goalkeeper Moeneeb Josephs had won back-to-back trebles with Orlando Pirates in 2011 and 2012‚ as had Klate.

It gave Wits the championship edge they needed.

Four of those players have moved on‚ and Pelembe is now 35.

The current Wits have good enough players to have rebuilt from a nightmare 2017-18 – where they fought relegation and finished 13th – to last season’s strong third position.

But in depth‚ and having a championship edge‚ without a sizeable budget‚ against heavy-spending contenders like Mamelodi Sundowns and Orlando Pirates‚ it will be difficult for Hunt to challenge for more than knockout trophies.