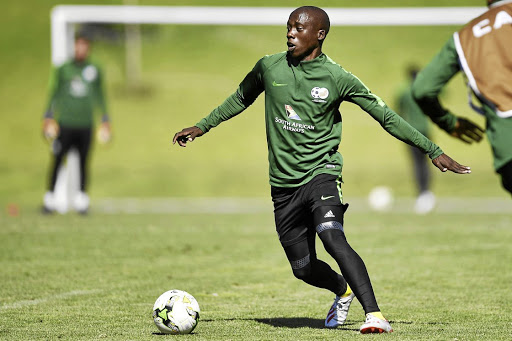 Ben Motshwari of Orlando Pirates, who was one of three players dropped from the Bafana squad this week, could yet make a return to team as he's one of the backup players in case of injuries, according to coach Stuart Baxter.
Image: Lefty Shivambu/Gallo Images

Should Bafana Bafana players suffer any injuries in camp, the technical team will use the pool of players who took part in the Cosafa Cup as backup.

The national team flew out to Dubai yesterday for the final leg of the preparations for the Africa Cup of Nations (Afcon) taking place in Egypt.

Bafana coach Stuart Baxter named his final 23-man squad on Sunday, but the technical team will have some players on standby. Ben Motshwari, Fortune Makaringe and Kermit Erasmus were the three players dropped from the squad.

"One of the reasons we had another team play at the Cosafa Cup is so that we have a pool of players who have been active and as cover in case one of the guys gets injured," Baxter said.

"Obviously, we will cross that bridge when we get to it, but that's the idea. We didn't want to have to call up someone who has been out of rhythm, because they have been on holiday on the beach for the past month."

South Africa claimed the COSAFA Cup Plate competition for the third year in a row with a 5-4 penalty shoot-out victory over Malawi after the teams ...
Sport
3 years ago

Baxter decided to send a reserve Bafana team, coached by David Notoane, to take part in the Cosafa tournament that ended at the weekend in Durban.

The senior team, meanwhile, were camped in Fourways for the past week where they were training at Steyn City.

Bafana will take on Ghana in a friendly in Dubai on Saturday and then Angola in Egypt on June 19.

A daunting battle lies ahead for them in Group D where they are pitted against giants Ivory Coast, Morocco and Namibia.

As they look forward to their opening match against Ivory Coast in Cairo on June 24, Baxter is optimistic that they can make it out of the tough group.

"We must go there and give three performances to get us through the group stages. the professional in me says if we get through the group, then I know this squad is capable of raising its game to another notch."