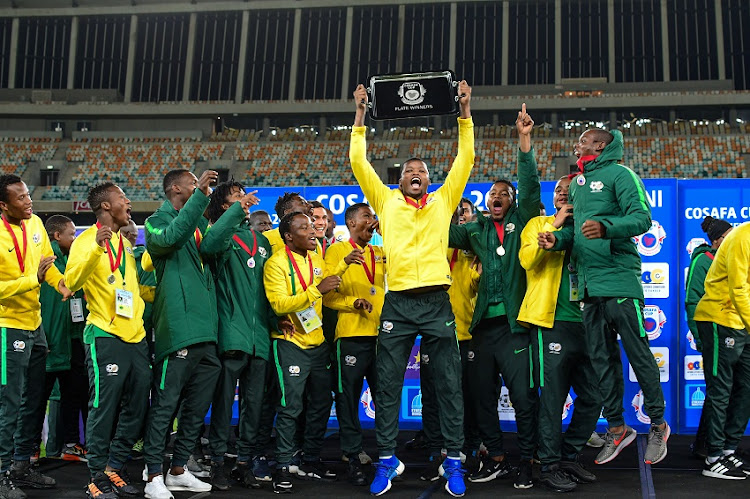 There were plenty of positive signs for coach David Notoane as South Africa claimed the plate competition at the Cosafa Cup for the third time in a row on Friday night with their young squad of mostly Under-23 players.

The competition also showed the coach that he has much to work to do ahead of his team’s 2019 African Under-23 Nations Cup qualifier against Zimbabwe in September‚ which in turn serves as the pathway to the Olympic Games in Tokyo next year.

How you view the tournament will be based on whether you are a ‘glass half full‚ or glass half empty’ person.

Draws against Botswana (2-2)‚ Uganda (1-1) and Malawi (0-0) means the team avoided defeat in all three games‚ but they did not pick up any wins either – not including the post-match penalties.

Botswana and Malawi had essentially their full-strength sides in Durban‚ while the Uganda selection was the one they will mostly use for the local-based African Nations Championship qualifiers‚ so no slouches either.

Winning the main cup trophy was a target of the team‚ but never the main aim as Notoane instead tries to find the right formula to reach the Olympics – and from that perspective the Cosafa Cup has been a valuable experience.

“Generally we are excited‚ maybe even a bit of emotional‚ in terms of the target we set for ourselves‚” Notoane said.

“It was important for us to come out of this tournament with something to look back on and I am happy for the players especially.

“We take a lot of lessons out of the tournament going into the Olympic qualification process.”

One of those lessons will be finishing. In all three games the team created numerous opportunities but managed only three goals. In Friday’s match with Malawi‚ they had 17 efforts on goal‚ but only one on target.

Notoane believes fatigue played a factor for both teams. Malawi were in their sixth game in 13 days while most of the South African players were coming off a three week break and played three matches in six days‚ not an easy task when you have not been training regularly.

“It was a game of two halves‚ they opened us up with [Gabadinho] Mhango peeling out wide and cutting inside‚ but we were prepared for that‚” the coach said.

“On the balance of the game‚ there was always going to be a fatigue factor‚ it was their [Malawi’s] sixth game‚ so in the latter stages of the game we changed the formation a bit and tried to keep the ball‚ to wear them down.”

The positives from the tournament? Mondli Mpoto put his hand up to become the No 1 U-23 goalkeeper‚ though he could face competition from current Under-20 gloveman Walter Khubeka.

Luther Singh continued to show he has a huge future‚ while Liam Jordan was impressive against Malawi and Teboho Mokoena superb in the midfield in the opening two games.

Kamohelo Mahlatsi showed glimpses of huge promise‚ though he must find a better end product‚ while Grant Margeman will surely not be at Ajax Cape Town next season.

Keanu Cupido is also a centreback not too far away from senior national team honours.