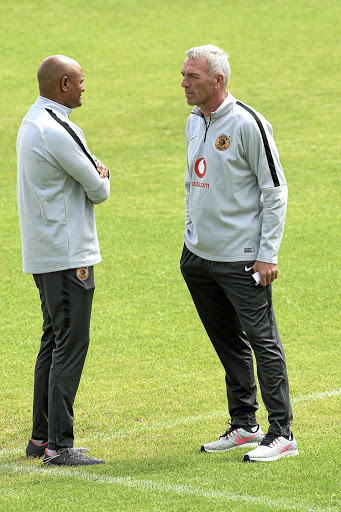 Kaizer Chiefs assistant coach Shaun Bartlett has revealed that the technical team has been hard at work on a recruitment drive for new players.

Amakhosi recently had a season to forget where the club finished ninth in the Absa Premiership and were embarrassed by minnows TS Galaxy in the Nedbank Cup final.

The team's lack of depth and quality was exposed as they extended their drought to four seasons without silverware.

"Since the day after the final we have been busy working. As a technical team we have looked at a few players and have given the names to the management," Bartlett said.

"We can't fool ourselves to think that we will go from ninth to winning the league. We need to freshen up a little and bring in players with a different hunger and desire."

The club has already been linked with Zesco United Zambian striker Lazaras Kambole and Polokwane City midfielder Sammy Seabi. The team is also set to part ways with a number of players.

Last week, Chiefs released a statement where they promised fans that "the rebuilding process for the 2019/20 season is already underway and all the necessary actions will be taken to ensure we restore this iconic institution to where it rightfully belongs".

Bartlett admitted the club will be off-loading a handful of players in the coming weeks.

"Probably five or six players will get released. We also have to see who has not played a part in the past season ... but it will not be a big list," he said.

After their Nedbank Cup final loss in Durban, there was uncertainty about coach Ernst Middendorp and his technical team's future. However, Baxter said they will still be in charge of the team next season. "As far as we know as the technical team, everybody will still be there going forward," Bartlett said.

Kaizer Chiefs are set to make wholesale changes after finishing outside the top eight and without a trophy.
Sport
2 years ago

Shaun Bartlett has had no communication from Kaizer Chiefs on his contract being cut short and is taking that as an indication‚ for now‚ that the ...
Sport
2 years ago

A coach is the one who should effectively and efficiently apply his technical and tactical skills.
Opinion
2 years ago
Next Article