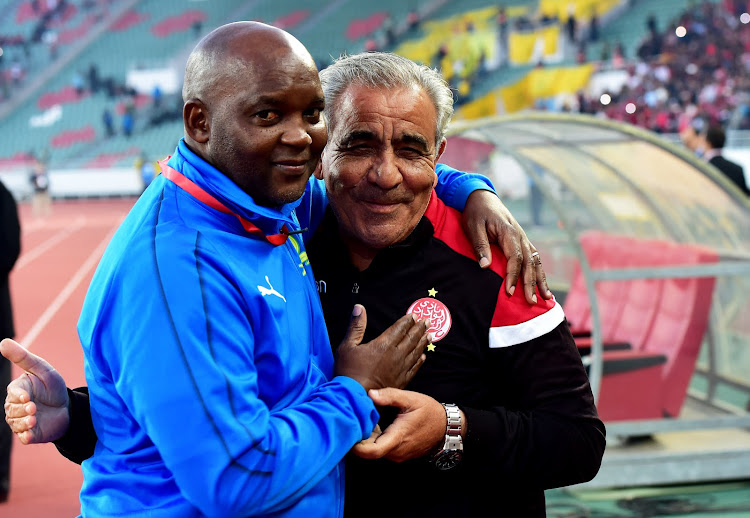 Mamelodi Sundowns and their fans may have suffered massive heartbreak after their loss to Wydad Casablanca at a packed Lucas Moripe Stadium in Atteridgeville at the weekend but coach Pitso Mosimane was humble and gracious in defeat.

Mosimane lavished praise on his conquers and said Sundowns lost to a better and more experienced team after the 2-1 aggregate defeat to the Moroccans in the semifinal stage of the Caf Champions League.

The Sundowns coach‚ who was bidding for a second Champions League final appearance in four years‚ said the result was a bitter pill to swallow but he added that his players did their best after playing in their 46th match of the season in all competitions.

Sundowns‚ who played in front of a packed Lucas Moripe Stadium in Atterideville‚ failed to get the one unanswered goal that could have overturned the 2-1 deficit and propelled them to the final on the away goal rule.

“Obviously I am disappointed that we did not go through to the final with this kind of support...... it is a bitter pill to swallow‚” he said.

"Their president took me to their dressing room after the match so that I can congratulate the players personally.

"We know each other very well because we have faced each other so many times.

"But this is football and we have to accept (the defeat) and try again next season.

"When you lose in the semifinal with a 2-1 aggregate‚ you need to face reality and accept it.

"It will come right‚ I am not disappointed with the team.

"I am disappointed with the result because I believe we had the opportunity to go to the final.

“I have seen Manchester City knocked out of the Champions League like this with a coach like Pep Guardiola‚ so who am I?

"I have seen big clubs in the world like Bayern Munich and Juventus knocked out of the Champions League‚ so would Sundowns not accept being knocked out in the semifinals?

"We will try again next year because we understand where we are and maybe our way in next years’ Champions League will be a little bit different.”

Mosimane also admitted that they did not play well on the day but players like Maboe and Morena gained valuable experience. “We did not start very well in the first 15 minutes‚" he said.

"There was a lot of anxiety and the fluidity that we always get was not there.

"I needed a little bit from Themba Zwane and Gaston Sirino.

"I tried to push everything with the substitutions by taking out right backs and putting in attackers.

“We got Maboe from Maritzburg United where they play just over 30 games a season and Morena from Bloemfontein Celtic.

"They have gained valuable experience playing at this level and that experience will help us next year.”