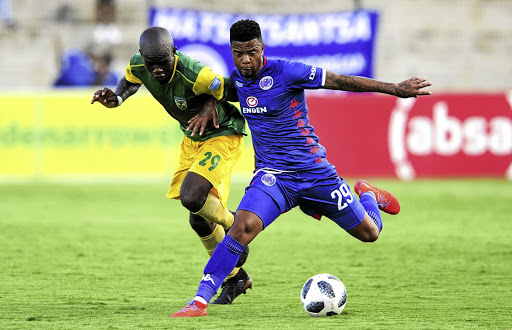 Lebese is on a six months loan deal with SuperSport after a frustrating spell with Mamelodi Sundowns since his arrival in 2017.

The 30-year-old made his debut for Matsatsantsa a Pitori as a substitute last week in their 3-2 win over Golden Arrows - his first appearance on the field of play since May 2018.

"The loan deal is an opportunity for me to try to raise my hand and show the club that I can deliver," he said. "If that happens then I would love to see something permanent happen."

Lebese's agent Steve Kapeluschnik pulled off the transfer on the last day of the January transfer window. The former Kaizer Chiefs fan favourite conceded that he had resigned himself to continuing his frustrating stay at Chloorkop.

"I didn't see it happening because it was on the last day of the transfer window. It was a bit stressful, but I was glad it finally happened. I am just happy to be here," he said at the club's training grounds in Sunninghill.

Having played a mere five games in the last 12 months, the Mamelodi-born chap admits that his fitness levels are not where they should be.

"In terms of getting minutes, obviously yes, I need to catch up because I haven't been in the field for long," he said.

During his time with Amakhosi, Lebese had many battles with fellow Soweto giant Orlando Pirates.

"Pirates have been very lethal this season and have been scoring goals so we have to try to stop that."

George Lebese has admitted that his frustrating spell at Mamelodi Sundowns left him with depression.
Sport
3 years ago

George Lebese is in line to make his anticipated debut for SuperSport United during their Absa Premiership clash against Lamontville Golden Arrows at ...
Sport
3 years ago

SuperSport United director of football Stan Matthews has issued an ultimatum to his players to finish the season inside the top six or face the ...
Sport
3 years ago

Veteran midfielder Reneilwe Letsholonyane will not be given preferential treatment and will be judged like any other player when contract ...
Sport
3 years ago
Next Article