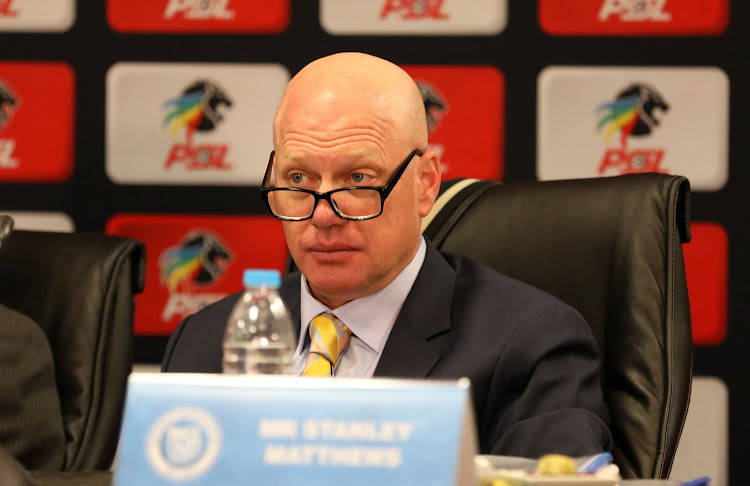 SuperSport United director of football Stan Matthews has issued an ultimatum to his players to finish the season inside the top six or face the consequences at the end of the premiership campaign in May.

United have lacked consistency under coach Kaitano Tembo‚ who was given the job on a full-time basis after he impressed as caretaker following the dismissal of Eric Tinkler‚ and Matthews said most of the players have been made aware that they are playing for their contracts.

“Players are either going to earn themselves new contracts or the new broom is going to have to come in and sweep clean‚” said Matthews.

United are currently eighth on the premiership standings with 26 points from 19 matches.

Their mission to force their way into the top six bracket continues on Sunday when they visit Golden Arrows at the Sugar Ray Xulu Stadium on Sunday.

They were recently dumped out of the Nedbank Cup by Cape Town City where they lost 2-0.

“I have shared it with them very clearly that if we are not in the top six‚ most them will either be offered their clearances or transfer listed‚” he said‚ adding that the club is careful how they operate on the transfer market because they are tightening their belts.

United only brought in Mxolisi Macuphu from Bidvest Wits and George Lebese from Mamelodi Sundowns on short-term deals until the end of the season during the transfer window and Matthews said they didn’t want to make panic recruitments.

“I don’t want a situation where we panic sign because we want to finish fourth instead of six and we hurt the club for the next three to four years because we have not brought in the right quality of players‚" he said.

"We know what type of quality we want‚ we understand that we are underperforming at the moment relative to where we have been for the last 15 years as club.

“But we also understand that football club is on a transitionary phase at the moment and unless we are ready to tighten the belt‚ we are going to be reckless with our football club and we don’t want to do that.

"With a new coach I made the cup final and managed to tighten my budget substantially with all the cut backs‚ I say to you that my board is happy with me.

“That is what the board want to see this year and we will re-launch and regroup for July with a stronger backbone because the three-year cycle of contracts that I have been living with since 2016 are about to come to an end in July.”

Matthews said if Lebese‚ who was frustrated at Sundowns due to limited game time‚ rediscover his form at the club they will return to Sundowns at the end of the season to negotiate buying the attacking midfielder on a permanent basis.