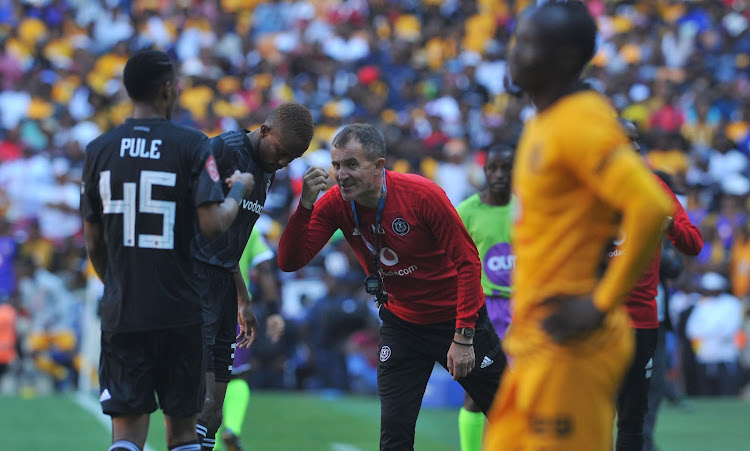 Orlando Pirates coach Milutin Sredojevic says planning for the demolition of Kaizer Chiefs started immediately after they were drawn against their bitter rivals in the semifinals of the Telkom Knockout.

Pirates beat Chiefs 2-1 in Durban on Saturday to score a third successive victory over their Soweto rivals this year.

“Players who didn’t take part in international matches during the Fifa break had a special programme‚” said Sredojevic.

“It is very hard to play a match of this magnitude in a very short space of time. "You need to realise the emotions and you need to prepare yourself thoroughly because this is not an ordinary match.

“It was not easy to win the match against a very much motivated Chiefs which was much better today than the last time.”

Sredojevic surprised Chiefs when he made four changes to the team he used when Pirates won the league derby 2-1 in October.

The changes paid off as the Bucs sealed their spot in the final against Baroka FC in Port Elizabeth on December 8.

Sredojevic explained that Motshwari was actually earmarked to start but got injured when they played a friendly in preparation for the match against Chiefs.

“We were praying hard that Motshwari comes back but he couldn’t pass the late fitness test‚” explained Sredojevic.

“It was unfortunate to play without the player (Motshwari) who has been consistent and maybe in the top three in matches that we have played.

“Musa Nyatama came in for Motshwari after some time on the bench and he applied himself very well in the engine room.

“Musa and Xola Mlambo did very well and I was happy with Musa's performance."

On the change in the goalkeeping department where Mabokgwane took Mpontshane’s position‚ the Bucs coach said the change was motivated by the need to give every player a chance to have a taste of what the derby is all about.

“First of all when you working with the team you need to have respect for every single player you have‚” said Sredojevic.

“For the spirit of the team we decided to play Mabokgwane. His save in the last kick of the game justified our decision.”