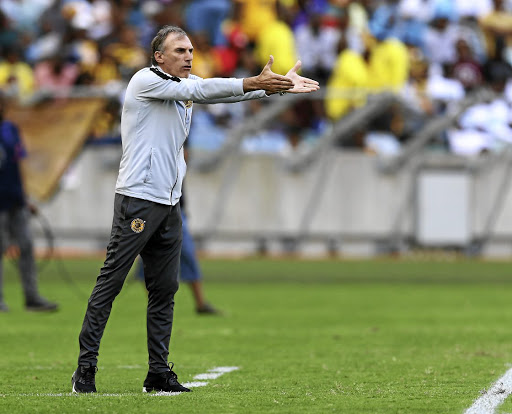 Kaizer Chiefs' Telkom Knockout quarterfinal victory over SuperSport United at the weekend seems to have restored coach Giovanni Solinas' cheerful character along with his sense of humour.

It was defender Ramahlwe Mphahlele's first-half wonder strike that sunk SuperSport, securing Chiefs a spot in the semifinals and setting up a date with Orlando Pirates later this month.

The Buccaneers have already claimed the bragging rights with a 2-1 league win last month.

Solinas hardly cracked his habitual jokes in his interactions with the media in the wake of losing the derby.

But that changed at the weekend at the Moses Mabhida Stadium following a victory over SuperSport.

With his jovial self reinstated, the Amakhosi mentor's amusement was echoed by him sparingly playing with Italian words and chortling in the middle of the media conference.

"Because we are Kaizer Chiefs we play to win. If my team performs like today, I do not fear any team, is the message clear?" he asked.

"After losing the derby, the reaction from my boys was positive today [on Sunday]."

Chiefs have been inconsistent in the league, winning only three of their 11 games with five draws and three loses. Solinas has since switched focus to improving in the league as they face Black Leopards at the FNB Stadium tomorrow (7.30pm).