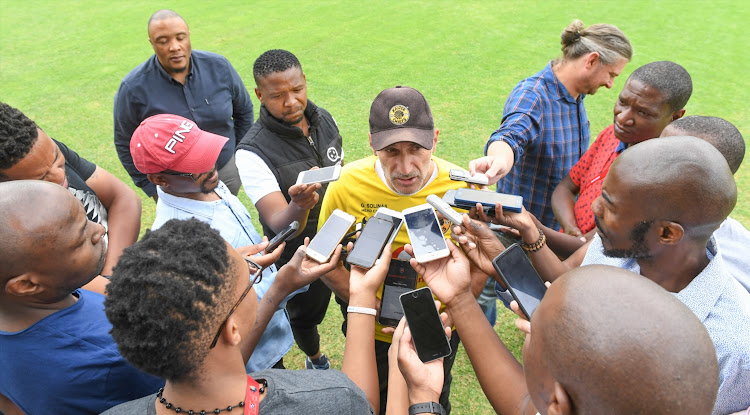 Solinas said that injuries had been part of the problem in Chiefs losing form in October from a good month in September‚ but admitted that his own chopping and changing of lineups had played some part too.

Chiefs’ 2-1 Soweto derby Absa Premiership defeat against Orlando Pirates at FNB Stadium on Saturday was their fourth game without a win in regulation time.

Before that their results had been a 0-0 away league draw against Highlands Park‚ 1-0 home league defeat against Polokwane City and penalties home Telkom Knockout win against Black Leopards.

“The lesson is that we have not collected the results. I agree – no results‚” Solinas admitted.

“Because I watched the video and our fans were crying. Our fans‚ who came for the derby‚ travelling two or three days. This has affected me.

“We need results. We have not collected points.

Chiefs’ poor October followed a September where they won three of four PSL games and Solinas won coach of the month.

The coach said injuries had played a role in the dip in form.

But Solinas also admitted that his chopping and changing of lineups had affected Chiefs’ consistency.

“We need more consistency. In September we played well‚ we won three games in a row‚” he said.

“And after that we never got results. But also a reason why is that in the squad we have injured players.

“So we played against Black Leopards without six players. Leonardo Castro’s injury for a month-and-a-half. Lebo [Manyama’s] injury [from a car accident].

“These are key players for us. This is the problem.

“We need consistency but also we need to play with the same players more often.

“Sometimes it’s my decision‚ but sometimes the injuries forced me to change. I don’t want to change for change.

"The injuries [sometimes] forced me.”

Solinas was speaking at a media open day at Chiefs’ Naturena headquarters ahead of their TKO quarterfinal matchup against SuperSport United at Moses Mabhida Stadium on Sunday (kickoff 3pm).