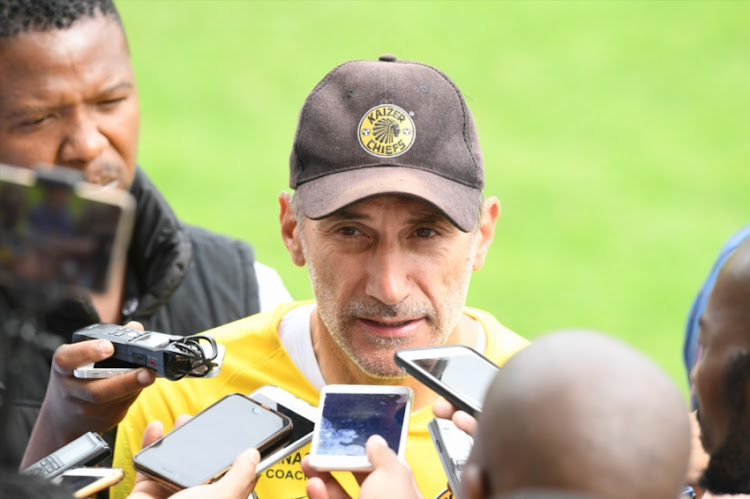 Kaizer Chiefs head coach Giovanni Solinas has revealed that the reason for Daniel Cardoso having not played since Amakhosi’s 0-0 league draw against Highlands Park at the beginning of the month is because the centreback had a virus.

Cardoso’s absence from the starting lineup – he was on the bench – was one of the talking points of Chiefs’ 2-1 Absa Premiership Soweto derby defeat to Orlando Pirates at FNB Stadium on the weekend.

Another talking point has been the four different centreback partnerships Solinas utilised in the three matches prior to the derby‚ then the game against Pirates itself.

Solinas defended himself‚ saying sometimes such changes at the back had been necessitated by injuries.

For the first time he revealed that Cardoso had a gastro-intestinal virus during the buildup to the derby.

“Also in this department [centrebacks] we don’t change for the sake of changing. We change because of injured players‚” Solinas said.

“For example‚ with Daniel Cardoso‚ he stayed 10 days without training because he had a gastro problem.

“It’s a virus. And he also stayed separated from his teammates‚ because it was contagious.

“And he has not trained for 10 days. He has lost weight because he has not eaten [properly]. So it was not possible to play with Daniel.”

Cardoso sat out Chiefs’ matches after Highlands – their 1-0 league defeat against Polokwane City at Moses Mabhida Stadium‚ then penalties Telkom Knockout win against Black Leopards at FNB two Sundays ago.

He was on the bench against Pirates.

Strangely‚ Solinas made no mention of Cardoso’s virus in the post-match derby press conference‚ when he became defensive being questioned about his choice of centrebacks against Pirates‚ saying Chiefs have the “best defenders in the country”.

Also strangely‚ Solinas also said Ngezana had picked up an injury against Leopards.

“We changed ‘Siya’ [Ngezana] because he had an injury against Black Leopards‚” the coach said‚ though somewhat mystifyingly Ngezana did start against Pirates.

He continued: “Also‚ for me‚ it’s not a problem playing one or another [centreback].

“Because‚ for example‚ when we played against Free State Stars the combo was Mario and Siya. We played very well – we won the game 2-0.

“So we need to believe in our players because they should be given a chance again.

“Yes‚ I agree‚ sometimes we need consistency in the back four because with understanding they play [together] much better.

“But sometimes we do not change for changing. We change because of injuries.”