Sundowns against ropes at CAF 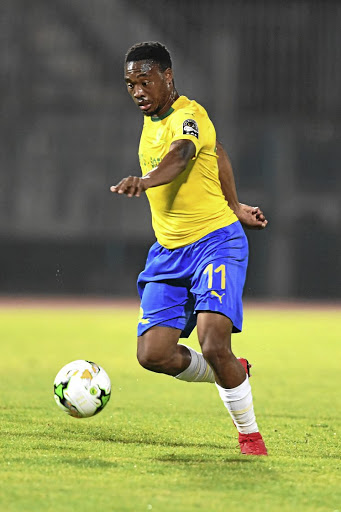 Faced with the prospect of their earliest CAF Champions League elimination for three years, Mamelodi Sundowns will accept even the ugliest of wins tonight in their final group phase match against Guinea side Horoya.

"Just a goal ... one goal, should be enough, even a deflection," said Sundowns coach Pitso Mosimane at yesterday's press conference ahead of tonight's epic clash at Lucas Moripe Stadium (6pm).

A situation where Sundowns find themselves in what Mosimane conceded was "desperate" has been mainly of their own doing.

The Brazilians had no business drawing their first two games - against Wydad Casablanca and Horoya - where they surrendered leads and thus collected two points out of six.

They now face a must-win situation and, to make matters worse, have to do so without two men - Percy Tau and Khama Billiat - who were key when they drew 2-2 at Horoya in May in Conakry.

Mosimane was at pains to explain to travelling reporters that the duo have left. "They are no longer here. Our team has taken a new direction.

"It's not easy without them, it's not smooth. But we have to move on. We have other players that should help us, we have enough ammunition to win without them."

Recent form - not only have Sundowns failed to win any of their past three games, they also have not scored - points to a difficult phase of adjusting to life without Tau and Billiat, as Mosimane had predicted.

But he remained confident his players rested from domestic commitments over the weekend - such as Themba Zwane, Sibusiso Vilakazi and Gaston Sirino - would return to propel his team to the quarterfinal stage this evening and thus avoid what would be Downs' earliest elimination from the competition since 2015, when TP Mazembe beat them.

Vilakazi, in particular, has proven key in this campaign, having scored in each of Sundowns' two home fixtures - against Wydad and Togo-Sport.

Sundowns, though, have had a wobbly run in Group C, having failed to keep a single clean sheet in five games, and even with a win, they would amass their lowest points tally from a group when compared to the previous two years.

Last year, they managed nine points, while in their triumphant run of 2016, they topped a three-team group with three wins from four games. "It's a no-brainer. We all know that it's a must-win. We have to raise the SA flag and not drop it," Mosimane said.