Teko Modise urges teammates to finish the job against Sundowns 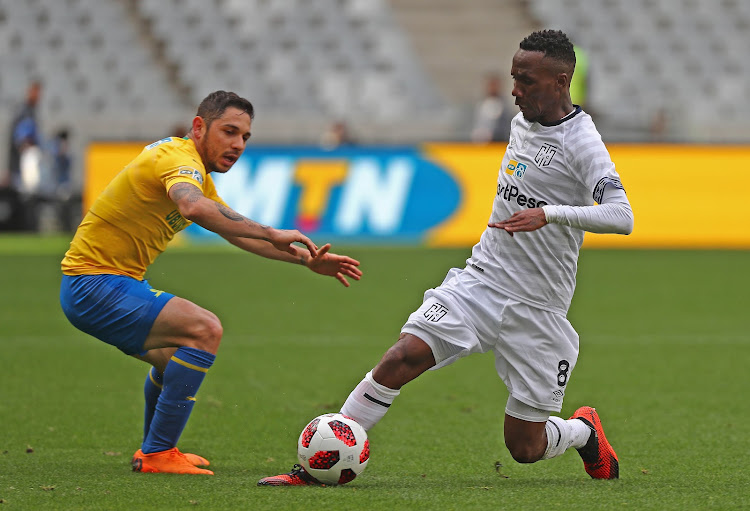 Teko Modise has urged his Cape Town City teammates to show confidence when they travel to Pretoria for the second leg of their MTN8 semifinal against Mamelodi Sundowns on Sunday.

City hold a slender 1-0 lead they got from defender Taariq Fielies in the first leg that turned out to be an open and enthralling encounter at the Cape Town Stadium and might have seen more goals from both sides.

Modise‚ restored to the starting line-up for the first time since the opening day of the season‚ was a stand-out performer for City against his former side and was given a rapturous send-off by both sets of fans when he was substituted mid-way through the second half.

“We have to play with our heads up‚ be confident and play smart‚" Modise said.

“We need to get one goal to calm our nerves and then if we play our normal football‚ I think we will win.”

Sundowns made nine changes to their side ahead of a crunch Caf Champions League tussle with Horoya of Guinea on Tuesday‚ but Modise does not feel this weakened them to a large degree.

“They have good players in their squad that the coach Pitso Mosimane can rotate as much as he wants. For us it is slightly different‚ we have to use what we have and I'm grateful that the guys showed up and we won the game.”

Modise says Saturday’s first leg was won after City showed more belief in the second half‚ having initially been too timid in the way they tackled Sundowns.

“It was a difficult game‚ it was a game of two halves. First half I think we were too scared of losing and started making mistakes‚” Modise said.

“Second half we became a different team‚ started pressing them high and they couldn't find their rhythm. I think we could have scored at least two goals to calm our nerves‚ but we will take this one and hopefully in the second game we will play better.”

City were losing finalists in the MTN8 last season‚ going down on penalties to SuperSport United in the decider.