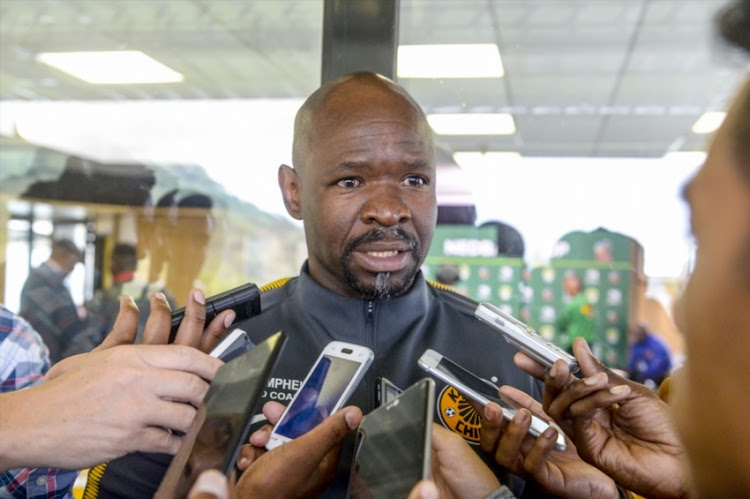 Former Kaizer Chiefs coach Steve Komphela has lashed back at Luc Eymael for a jibe made by the Free State Stars coach after this weekend’s Nedbank Cup final‚ slamming the Belgian as “a mercenary”.

Speaking on MetroFM’s Ultimate Sports Show with Thomas Mlambo‚ an uncharacteristically emotional Komphela angrily accused Eymael of having insulted not just himself‚ but also Stars and Chiefs.

Eymael had rubbed it in during his post-match press conference on Saturday‚ after Stars beat Maritzburg United 1-0 in the Nedbank final‚ that he had won his first trophy in his second year in South Africa‚ while he knows “some of the guys who have worked 13 years without winning a trophy”.

This was a clear reference to Komphela‚ who resigned as coach of Chiefs last month after three years without a trophy‚ and is yet to win silverware in his career.

Eymael has been linked to the vacant Chiefs job.

He also said in his press conference that if he was not contacted by Amakhosi or SuperSport United this week he would commit to Stars.

“There’s a guy‚ uGeorge Bernard Shaw – there’s one quote that he once gave‚ making reference to a pig‚ that you don’t wrestle with a pig in the mud‚ because it will get you dirty.

"And besides‚ the pig just loves that. Which is why I ignored him‚” he told Mlambo.

“Luc Eymael – I wish he was here so that we could talk. Because again now‚ I’m responding here and he’s not here‚ he’s going to come up and say‚ no I was talking about him on Metro‚ and all that.

“I don’t want that. I told him anyway in Bethlehem what I feel about him‚ and I don’t move an inch‚ I still believe that.

“You see there’s a big perception by some of these who come here to South Africa‚ thinking that we South Africans have to lie there and then they must make us carpets.

“No‚ no‚ no. One big mistake is that when I lie down and then you accept that you must dust your feet‚ it’s not that I’m a carpet‚ but I must [show] humility. It is not that I’m stupid.

“So‚ Luc Eymael‚ these are mercenaries. You can see the profile of this guy.

“He comes to Polokwane City‚ he doesn’t complete a contract. Lack of courtesy and professionalism.

“He goes to Bloemfontein Celtic and all that. Now listen to what he says. I have never seen a human being think like this. Not unless this guy thinks very little of us as a society.

“He says he is giving Chiefs and SuperSport a week to respond to him. If they come in a week‚ then he’s not going to go back there [to Stars].

“My man‚ how do say such? Even in the press conference he was not even aware that he was busy insulting his current employers.

“We as South Africans‚ this is the ill that we need to address in our society.

“But somebody they cannot easily identify with then they all of a sudden have this respect. They need to have a paradigm shift.”

Komphela quit Chiefs after the 2-0 Nedbank semifinal defeat against Stars at Moses Mabhida Stadium on April 21.

An attempt to contact Eymael on his cellphone on Thursday afternoon for a response was unsuccessful.