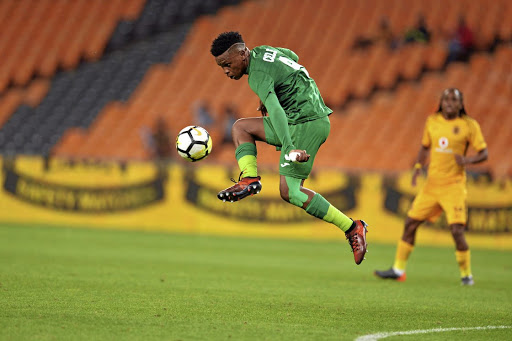 Mhlengi Cele of AmaZulu has bagged seven goals so far this season and is part of the reason Usuthu have avoided relegation.
Image: Lefty Shivambu

At the start of the season, experienced strikers Mabhuti Khenyeza and Siyabonga Nomvethe were expected to be key for AmaZulu but the seasoned striking duo did not quite live up to expectations.

Nomvethe has played 20 games, scoring only twice, while Khenyeza has three strikes with two more appearances than Nomvethe.

As the pair fizzled out, Mhlengi Cele, 31, stepped up to the plate. He established himself as one of the most important members in coach Cavin Johnson's team, scoring seven goals in 24 outings.

Cele's blistering form has been one of the key factors in AmaZulu avoiding relegation, despite having little time to prepare for the season after acquiring the status of Thanda Royal Zulu, whom he played for in the NFD last season.

"At the start of the season my target was to score 10 goals but I did not start the season well. I am happy that my goals have helped the team to remain in the Premiership,'' Cele said yesterday.

AmaZulu are eager to secure their spot in the top eight but will have to beat Cape Town City at King Zwelithini Stadium tomorrow (3pm) if they are to have any chance.

Usuthu are 11th on the log on 35 points, one adrift of a top- eight berth.

"That game against Cape Town City will define our season. For me we must finish in the top eight to say we had a good season," Cele said.

"AmaZulu are one of the biggest teams and as players we know our responsibilities.''

The lad from Eshowe, KZN, feels the reason he managed to maintain his NFD form in the Premiership is because he plays with some of the players he was with at Thanda.